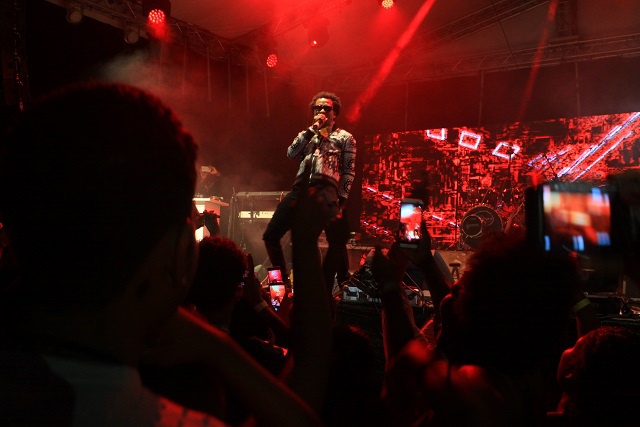 (Seychelles News Agency) - Seychelles’ music fans saw firsthand how Jamaican artists move to dancehall and rock to the roots reggae beats on Friday night in the centre of the country’s capital, Victoria.

Charly Black, well known for his song ‘Gyal You a Party Animal’ with his group ‘Unstoppable,’ gave a spectacular performance for their local fans who turned up in great numbers.

In a message to local fans, Black and his group in a radio interview before the show, said, “Whether it rains or not you guys need to all come for the show, so you all need to do is go get your tickets right now cause your party animal is gonna heat up the place.”

Black and his group did heat up the place, confirmed local artist Elijah, who was part of the organizing team for the show, in a short interview with SNA on Saturday.

“The performance surpassed my expectation. We saw singing and dancing of dancehall live which we only watch in movies. It was simply awesome,” Elijah told SNA.

Charly Black, whose real name is Desmond Mendez, was born in Jamaica and began his musical career as a selector in 2005, which means being a DJ at a dance club and using vocals to keep the crowd engaged.

He made it big in the dancehall world with his song ‘Nuff Nuff Luv’ in 2007 and had another hit with ‘Whine and Kotch’ he sang with J Capri in 2012.

While Black is more into dancehall, part of his crew who performed in Seychelles, Diligence, is more into roots reggae.

Diligence was impressed with the islands which he says look just like home.

“Seychelles is nice a place, and I love it. It’s just like Jamaica. I just love the people. Tonight Diligence is gonna bring some new reggae sensation, roots rock reggae music.”

The two artists together wowed the local fans in Victoria and went on to Praslin, the second-most populated island.

Elijah said after the performances he is now considering becoming a music promoter and will be working towards bringing more artists to the Seychelles.

“I have received amazing feedback and people are already asking me who will be coming next. That is my next project,” said Elijah.