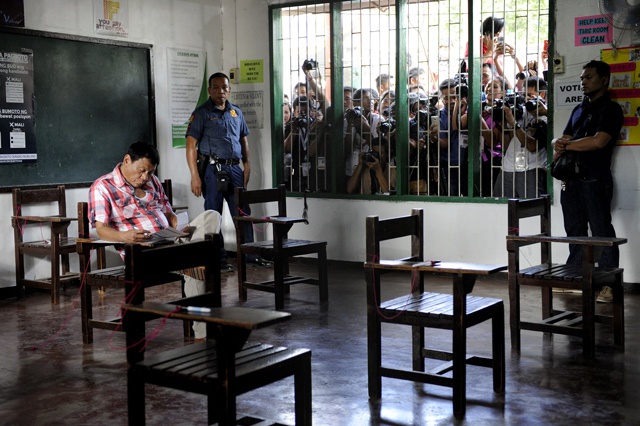 Philippine presidential candidate and Davao City Mayor Rodrigo Duterte casts his vote at a voting precint at Daniel Aguinaldo National High School in Davao City, on the southern island of Mindanao on May 9, 2016. (NOEL CELIS / AFP)

However authorities described the violence as isolated incidents and that the overall conduct of the elections -- which will see tens of millions of people cast their votes for president and 18,000 other positions -- was peaceful.

In the worst attack, seven people were shot dead in an ambush before dawn in Rosario, a town just outside of Manila known for political violence, Chief Inspector Jonathan del Rosario, spokesman for a national police election monitoring task force, told AFP.

In Guindulungan, a small impoverished town in the strife-torn southern Philippine province of Maguindanao, where warlord-politicians have their own private armies, a voter was shot dead inside a polling station, police said.

A bystander was also killed when a grenade was launched at a market in Cotabato, a major city in the south that neighbours Maguindanao, as people were casting their votes, police said.

In the nearby town of Sultan Kudarat, a stronghold of the nation's biggest Muslim rebel group, 20 men forced their way into a voting centre and carted away voting machines, police chief Senior Inspector Esmael Madin said.

In the northern province of Abra, infamous for politicians killing each other, armed supporters of rival mayoral candidates shot at each other, leaving one person dead and two wounded, provincial police spokeswoman Marcy Grace Marron told AFP by telephone.

Police arrested two men and two women with guns after the fighting in the mountainous town of Lagayan, 350 kilometres (217 miles) north of Manila, Marron added.

Still, elections commissioner Rowena Guanzon said the violence would not impact the result, noting they had taken place in known "hot spots" where extra security forces were in place.

"There are isolated incidents. (They) had minimal effect on the conduct of the elections," he told AFP.

Fifteen people had been confirmed killed in pre-election violence since the start of the year, according to the national police poll monitoring taskforce.

Political violence is a longstanding problem in the Philippines, fuelled by lax gun laws, corrupt security forces and political "dynasties" that often have their security forces.

Rodrigo Duterte, the tough-talking mayor of southern Davao city, is the favourite to win the presidential elections after campaigning on a platform of killing thousands of criminals that critics say will incite more violence.