Rwandan mayors go on trial in France over 1994 genocide 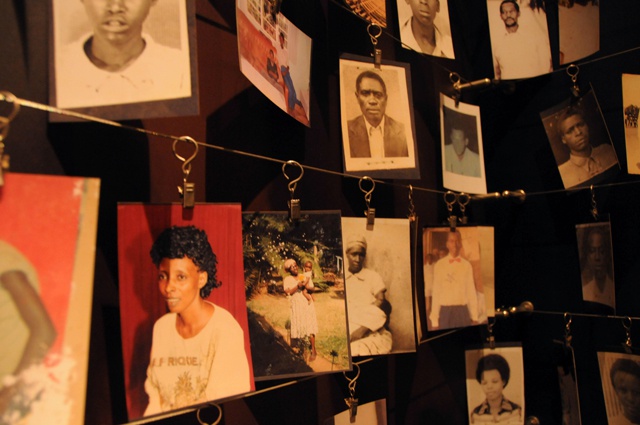 This file photo taken on April 07, 2012 shows potos of victims of the 1994 Rwandan Genocide displayed at the Genocide Memorial in Kigali. (STEVE TERRILL / AFP)

(AFP) - Two former Rwandan mayors go on trial in France Tuesday facing charges of crimes against humanity and genocide over the 1994 massacres in the central African country.

The second trial in Paris by a special court created to go after suspected Rwandan killers who fled to France is expected to lay bare the strained relations between the two countries.

Two decades on, Rwanda accuses France of complicity in the genocide -- in which at least 800,000 people died in an 100-day slaughter -- because of its unwavering support for the Hutu nationalist government at the time.

On the 20th anniversary of the mass killings two years ago, Rwanda's minority Tutsi president, Paul Kagame, openly accused French soldiers of not only complicity in the genocide but of actually taking part in it.

On Tuesday, Octavien Ngenzi, 58, and Tito Barahira, 64, go on trial for allegedly playing a direct role in the massacre of hundreds of Tutsi refugees in a church in the eastern town of Kabarondo on April 13, 1994.

The pair were sentenced in absentia to life imprisonment by Rwandan people's courts, known as gacaca, in 2009.

They deny accusations of carrying out "massive and systematic summary executions" and implementing a "concerted plan aimed at the annihilation" of the Tutsi minority.

The killings in Kabarondo, a town near the border with Tanzania, took place with great speed.

The bloodshed was over by the end of April, when Tutsi rebels in the armed wing of what is now the ruling Rwandan Patriotic Front (FPR) took control of the area.

Elsewhere in the former Belgian colony, the slaughter would continue until the FPR fighters finally prevailed in July.

The mayors' trial, which is set to last eight weeks, comes two years after that of Pascal Simbikangwa, a former Rwandan army captain who was jailed for 25 years for his role in the genocide.

The defence has denounced that verdict as "political" and is appealing it.

Witnesses have said that on the morning of April 13, they saw Barahira, wielding a spear, at a rally at the football field where he called for "work" -- code for killing Tutsis.

Soon afterwards, hundreds of refugees who had arrived in recent days were hacked or beaten to death or blown up with hand grenades within the space of a few hours, according to survivors.

Kigali broke off ties with Paris in 2006 after a French judge issued arrest warrants against nine Rwandan officials over the assassination of Hutu president Juvenal Habyarimana.

The shooting down of the presidential plane on April 6, 1994, was blamed on the Tutsis and is considered to be the event that sparked the genocide.

Last year, charges were thrown out against a priest, Wenceslas Munyeshyaka, the first Rwandan to be prosecuted in France in what had also been viewed by his defence as a politically motivated case.