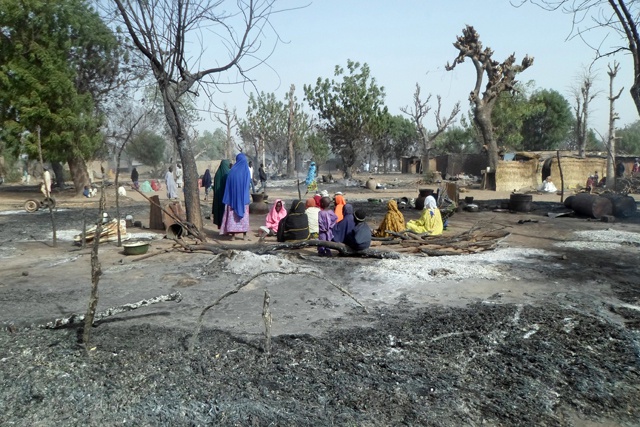 File Photo: Women and children sit among burnt houses after Boko Haram attacks at Dalori village on the outskirts of Maiduguri in northeastern Nigeria on January 31, 2016. Amnesty International on Wednesday urged Nigeria to shut down a military detention facility for Boko Haram suspects after nearly 150 people. (STRINGER / AFP)

(AFP) - Amnesty International on Wednesday urged Nigeria to shut down a military detention facility for Boko Haram suspects after nearly 150 people, among them children and babies, died there in custody.

The human rights monitor has previously criticised the treatment of civilian detainees and "inhumane" conditions at the Giwa barracks in Maiduguri, northeast Nigeria.

In a new report, it claimed at least 149 people had died at the camp this year alone, 12 of them children. The victims included 10 boys and two girls, most of whom were under five. The youngest was five months old.

"The discovery that babies and young children have died in appalling conditions in military detention is both harrowing and horrifying," said Amnesty's Africa director Netsanet Belay.

"We have repeatedly raised the alarm over the high death rate of detainees in Giwa barracks but these findings show that, for both adults and children, it remains a place of death.

"There can be no excuses and no delay. The detention facilities in Giwa barracks must be immediately closed and all detainees released or transferred to civilian authorities."

- 250 people per cell -
In a report entitled: "'If you see it, you will cry': Life and death in Giwa barracks", Amnesty interviewed former detainees and eye-witnesses who said many died from disease, hunger, dehydration and injury.

In March, a total of around 1,200 people, including some 120 children, were believed to be detained at the barracks in overcrowded and unsanitary conditions.

Improvements put in place since previous criticisms of the facility, appear to have been cancelled out by an increase in mass detentions in the ongoing military counter-insurgency, the report stated.

Witnesses were quoted as saying 12 children had died since February and that disease was rife because of overcrowding in three women's cells where young children and babies were being held.

Since last year, the number of detainees had risen from 25 per cell to 250, the report said.

"There are many children with us in the cell (aged) between one month and one year. The cell is too congested, you can't turn from right to left when you sleep," one woman was quoted as saying.

Witnesses said soldiers ignored pleas for medical attention, diseases such as measles and diarrhoea were common, and there was a lack of cleaning facilities.

Other complaints included the splitting up of families who were arrested together, and a lack of food and water.

Nigeria's military has not denied it has detained children.

On February 12, the army said it had cleared and released 275 detainees, including 50 children, who had been detained on suspicion of involvement in "terrorism or insurgency".

Amnesty claimed that none of them had been brought before a court or allowed access to lawyers while in detention, in violation of domestic and international law.

Gravediggers at Maiduguri's biggest cemetery in the Gwange district told AFP in February that civilians who died in Giwa barracks were buried at the site.

The report said 136 men had died in addition to the 12 children since January and that bodies from Giwa were brought to a local mortuary in a rubbish truck "two or three times a week".

The London-based rights group has previously accused the military of summarily executing more than 600 detainees who escaped from Giwa in March 2014 after a Boko Haram attack.

Last June, Amnesty catalogued a list of actions carried out by senior army commanders during operations against Boko Haram that it said constituted war crimes and crimes against humanity.

Nigeria's President Muhammadu Buhari has promised to look into those claims, saying the government "will not tolerate or condone impunity and reckless disregard for human rights".

But in its latest report, Amnesty said "no steps have been taken so far to initiate independent, impartial and effective investigations or prosecutions of crimes committed".