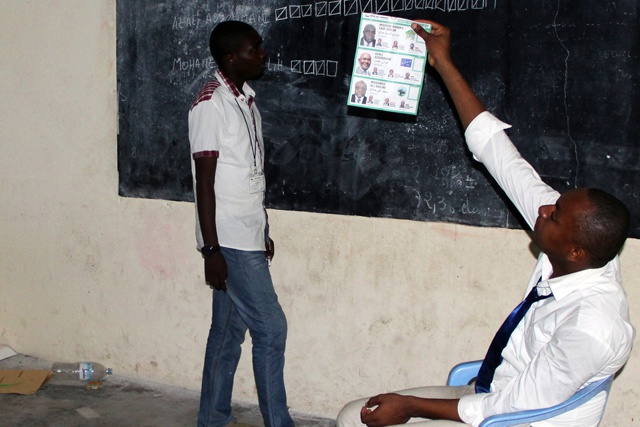 File Photo: Officials count votes of the second turn of the Comorian Presidential elections on April 10 2016, in Moroni. The island nation of Comoros voted in a tense three-way presidential run-off election featuring the current vice president and a former coup leader who ruled the country for seven years. (IBRAHIM YOUSSOUF / AFP)

(AFP) - Several thousand voters in Comoros, the archipelago nation off the east coast of Africa, headed to the polls Wednesday in a partial re-run of the presidential election with the result hanging in the balance.

The vote on Anjouan, one of the nation's three islands, was tarnished by broken ballot boxes, interruptions in voting, accusations of ballot stuffing and some incidents of violence.

Turnout was high on Wednesday, with hundreds of people waiting in line as armed security forces stood guard to ensure voting was smooth.

"We did not vote last time but today the military are protecting me and my blind husband," Boueni Aboudou told AFP.

Assoumani took 40.98 percent of the nationwide vote in April, just ahead of Vice President Mohamed Ali Soilihi, the ruling party's presidential candidate, who picked up 39.87 percent.

Soilihi, who is known as Mamadou, said he rejected the provisional result.

The three islands that make up the Comoros -- Anjouan, Grande-Comore and Moheli -- have a total population of just under 800,000 people, nearly all of whom are Sunni Muslims.

The islands, situated between Madagascar and Mozambique, have been plagued with coups and political instability, and a disputed election result could revive tensions.

A first-round vote in February between 25 candidates took place only on Grande-Comore island, in line with electoral rules to choose the president on a rotating basis from the three islands. The April 10 run-off was expanded to all three islands.

Comoros' system was established in 2001 after about 20 coups or attempted ones, four of which were successful, in the years following independence from France in 1975.

The election winner will take over from outgoing President Ikililou Dhoinine, who completed his five-year term in office.