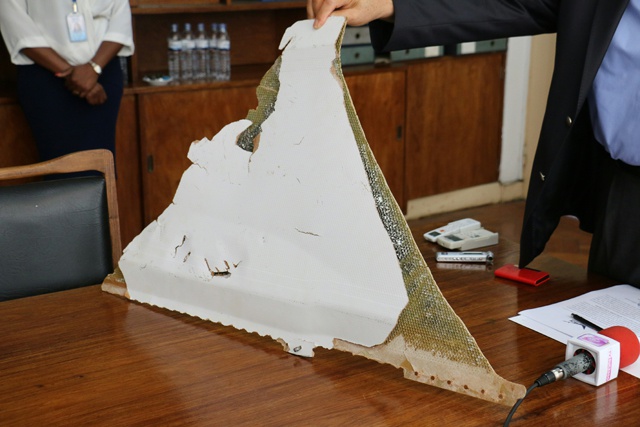 The items were brought to the Australian Transport Safety Bureau's laboratories for testing, as authorities seek to work out what happened to the plane, which vanished en route from Kuala Lumpur to Beijing on March 8, 2014.

It follows a wing part recovered last year from the Indian Ocean island of Reunion, which neighbours Mauritius, being confirmed as coming from the jet.

Since then two more items found about 220 kilometres (140 miles) apart from each other in Mozambique in December 2015 and February 2016 have been examined.

The ATSB in March said these were also "almost certainly" from the Boeing 777 aircraft operating as MH370 that disappeared with 239 passengers and crew on board.

One of the new parts, found at Mossel Bay in South Africa, was an aircraft engine cowling, identified from a partial Rolls-Royce stencil.

While there was no direct link on the cowling unique to MH370, the ATSB said the stencil was consistent with those developed and used by Malaysian Airlines.

The other part, which washed up on Rodrigues island, was a decorative laminate from a "work table" in the main cabin, used by no other Boeing 777 customer than Malaysia Airlines.

Given this, it concluded that "part no.3 was a Malaysian Airlines Boeing 777 engine cowling segment, almost certainly from the aircraft registered 9M-MRO", which operated as MH370.

"Part no.4 was a Malaysian Airlines Boeing 777 panel segment from the main cabin, associated with the Door R1 closet, almost certainly from the aircraft registered 9M-MRO."

One of the pieces found in Mozambique, which had a number stencilled on it, was identified as a segment from a Boeing 777 flap track from the right wing, with stencilling on it conforming to that used by Malaysia Airlines.

The other, which had the words "No Step" on it, was part of a Boeing 777 horizontal stabiliser panel with stencilling also consistent with that used by the carrier.

Australia is leading the search for the plane in the remote southern Indian Ocean, believed to be its final resting place, and has so far scoured 105,000 square kilometres of deep ocean floor without finding any trace.

If nothing is found once the designated 120,000 square kilometre zone is searched, it is likely to be abandoned, Australia, Malaysia and China have jointly said.