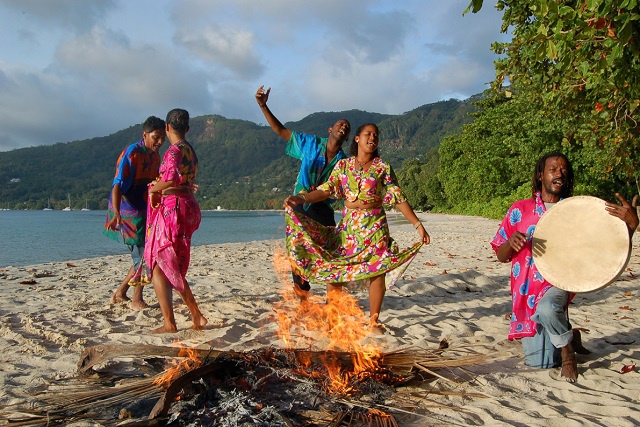 (Seychelles News Agency) - The music of Seychelles has been influenced by a mosaic of the world's citizenry. It is heavily influenced by Europeans who introduced dances such as kanmtole and kontredans, and Africans with the moutya, which was seen as a crie de coeur by the slaves. Here is a short recap of the island instruments that makes the Seychelles' islands dance.

This is a flat drum made of wood and cow or goat skin. It is a handheld instrument that gives the base sound in the moutya songs. The wooden part of the tanbour is made from ‘var’, a tree that grows on the seaside. The drum has a diameter of 60-80cm. The moutya song is traditionally played with three drums that make three varying sound.

This is an instrument that has one end in the ground. The base is a tin can and the upper part is a set of strings attached to a wooden pole. Makalapo is about two feet long and the player has to put it in between their legs. It is played in a corner in order to achieve an echoing sound and is believed to originate from the Zulu and Makhuwa tribes of Africa.

This one was brought by the slaves and is a solo instrument. It was used mostly on outer islands where other forms of music were not easily available. Bonm was popularized in Seychelles by local veteran, Jacob Marie, better known as ‘Ton Pa’ who passed away some years ago. It is a one-string instrument with a calabash at 1/3 across the length of the string. Bonm is used in the unique songs of Ton Pa.

This instrument is very similar to a bonm. It is a one-string instrument with a gourd resonator used to provide a steady rhythm to the narration. Songs and lyrics that accompanied the bonm and zez were slow and soft in nature and usually described island life in the early 1900s.

Like most of the instruments in the Seychellois culture, the mouloumba was introduced by slaves who came to work the land. It is a simple instrument, akin to a drum made from about 2.5 feet of bamboo.

Editor's note: In view that the Seychelles music industry has evolved it is quite rare to find the traditional music instruments.

2 great Seychellois athletes and all their recent top achievements

7 reasons why Seychelles should be your No. 1 destination in 2020

8 ways Seychelles has been recognised for its dedication to the environment, Blue Economy