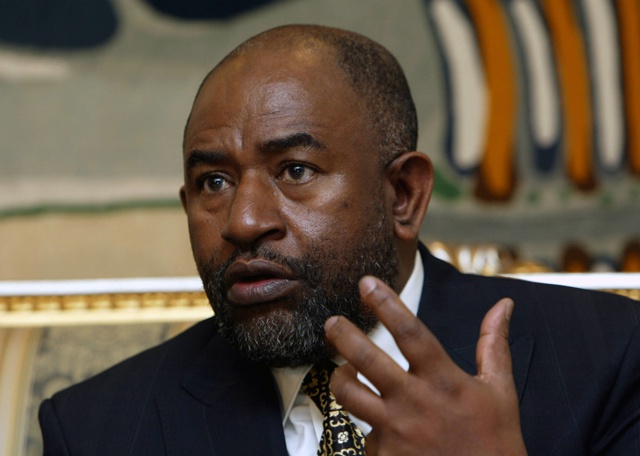 This file photo taken on March 05, 2006 shows President of the Comoros Azali Assoumani speaking on March 5, 2006, during a press conference in Dakar during a visit to Senegal. Former coup leader Azali Assoumani was elected president of Comoros on May 12, 2016, according to official provisional results, after an earlier poll had to be partially re-run due to violence and "irregularities". (AFP Photo)

(AFP) - Former coup leader Azali Assoumani was elected president of Comoros on Thursday, according to official provisional results, after an earlier poll had to be partially re-run due to violence and "irregularities".

He won again by 2,271 votes to 1,308, the electoral commission said, increasing the lead he took last month.

Two percent of the electorate needed to vote again Wednesday, with hundreds of people waiting in line during the day as armed security forces stood guard to ensure polling was smooth.

"We did not vote last time but today the military are protecting me and my blind husband," Boueni Aboudou told AFP.

The army deployed 200 soldiers in Anjouan, one of three main Comoros islands, according to the country's Chief of Staff Youssouf Idjihadi.

In Mramani in the south, where voting had to be discontinued last month after a crush of voters, as many as 100 armed soldiers stood guard outside five polling stations located in a school, according to an AFP journalist.

Polls closed at 1500 GMT and voting passed off without any major incidents, according to an AFP journalist.

The colonel's inauguration is scheduled for May 26.

Assoumani took 40.98 percent of the nationwide vote in April, just ahead of Vice President Mohamed Ali Soilihi, the ruling party's presidential candidate, who picked up 39.87 percent.

Soilihi, who is known as Mamadou, said he rejected the earlier result.

"I expect concrete benefits for my vote: a decent price for cloves, work for my children and food at affordable prices," said Idrissa Ahmada, a farmer and father of nine before polls closed.

The three islands that make up the Comoros -- Anjouan, Grande-Comore and Moheli -- have a total population of just under 800,000 people, nearly all of whom are Sunni Muslims.

Comoros' electoral system was established in 2001 after about 20 coups or attempted takeovers, four of which were successful, in the years following independence from France in 1975.

Assoumani is set to take over from outgoing President Ikililou Dhoinine, who completed his five-year term in office.