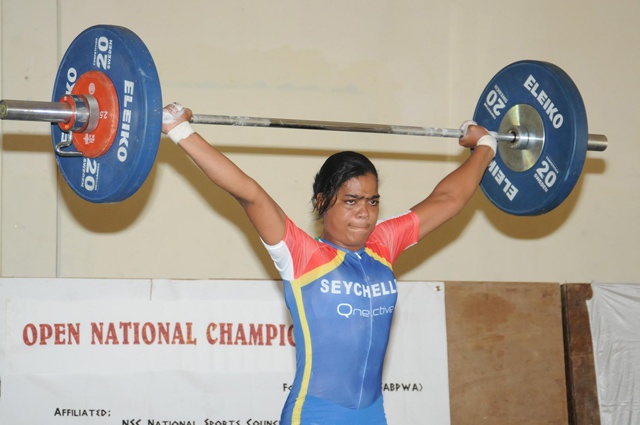 Agricole lifted 77kg in snatch and 101kg in clean and jerk. With a total of 178kg, she came out third after two Nigerian lifters who won the 58kg category’s gold and silver medals.

Agricole, Seychelles' triple-gold medallist at the 9th Indian Ocean Island Games in August 2015 and a winner of silver and two bronze medals at the All-Africa Games in September 2015, has been training in the United States since 2015 under an Olympic solidarity sponsorship.

She is among three weightlifters representing Seychelles at the Yaoundé competition which started last Sunday.

Rick Confiance, the sole male lifter, managed a 6th place finish out of 10 lifters in his 62kg category, lifting all together 230kg on Monday.

One of Seychelles' most experienced lifters, Janet Georges, competed in the 69kg category Wednesday evening, coming out fifth out of seven athletes. Georges lifted 175kg in total.

The Yaoundé competition which ends on Saturday May 14 is also a Rio Olympics qualifying event, although the Seychelles’ coach William Dixie says qualification for one of the Seychellois athletes “is almost impossible.”

Dixie explained to SNA on Thursday that Olympic qualification for countries like Seychelles in weightlifting is the most difficult as this is based largely on team points which determines a country’s quota places.

“We needed a complete team at the Yaoundé competition, seven female and eight male athletes, but we only went with three.”

According to Dixie it’s been difficult to have a complete team because not all athletes have resumed training since the Indian Ocean Island Games ended in August 2015.

While individual qualification is also an option, Dixie noted that an athlete has to be among the 10 best in his or her category worldwide to get an Olympic spot.

There are two more qualifying events remaining for Seychellois weightlifters to try and make the cut for the Rio Games in August 2016.