New era for Brazil as Rousseff cedes power to Temer 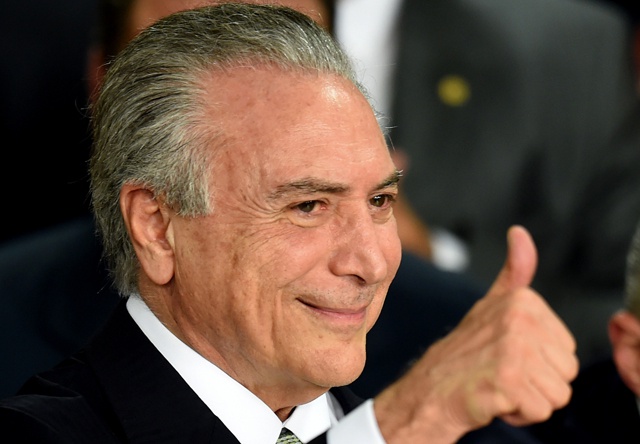 Brazil's acting President Michel Temer gestures during the inauguration ceremony of the new ministers at Planalto Palace, in Brasilia, on May 12, 2016. (EVARISTO SA / AFP)

The center-right former vice president wasted no time in putting his stamp on Brazil, naming a new government he said would restore "credibility" after months of economic and political turmoil.

One key nomination was a respected former central bank chief, Henrique Meirelles, for finance minister, with the task of helping the huge economy claw out of the deepest recession in decades.

"We must significantly improve the business environment for the private sector," Temer said in the presidential palace just hours after Rousseff left, amid emotional scenes, to start her six-month suspension pending an impeachment trial on charges that she broke government accounting rules.

"It is urgent to restore peace and unite Brazil," said Temer, 75, who at one point lost his voice while addressing allies and a crush of journalists.

Temer offered an olive branch to Brazil's left, which accuses him of having engineered the impeachment process to mount a coup. He vowed "dialogue" and promised to maintain the generous social programs run by Rousseff's Workers' Party, lifting tens of millions of people from shocking poverty.

However there was immediate criticism of the fact that the new cabinet consists entirely of white males -- a dramatic shift from the more diverse cabinet presided over by Brazil's first female president.

"It's a government of white men and quite frightening," said analyst Ivar Hartmann, a public law expert at the FGV think tank in Rio de Janeiro. "It's the first time since the (1964-1985) dictatorship that there has not been a single woman. This is worrying."

A small but noisy group of female protesters chanted "putschist!" as Temer and his new ministers entered the executive building.

Defiant to the end, Rousseff used her final minutes in the presidency to denounce the "coup" and urge supporters to mobilize as she braces for an impeachment trial set to drag on for months -- including through the Olympics, opening in August in Rio de Janeiro.

"What is at stake is respect for the ballot box, the sovereign will of the Brazilian people and the constitution," Rousseff said in what could be her final address from the presidential palace, dressed in a white jacket and flanked by her soon-to-be-sacked ministers.

"I may have made mistakes, but I committed no crimes."

Several of her staff were in tears.

She then exited the building to shake hands, hug and wave to some 500 supporters in a cheering, red-clad crowd gathered outside the modernist capital's seat of power.

There, she gave another fiery speech, while her predecessor and mentor, the once wildly popular Luiz Inacio Lula da Silva, stood by her side, repeatedly wiping the sweat from his brow in the tropical heat.

She was then whisked away in a convoy of black vehicles.

Hours earlier, a nearly 22-hour debate in the Senate closed with an overwhelming 55-22 vote against Rousseff, as pro-impeachment senators burst into applause and posed for selfies and congratulatory group photos.

The 81-member Senate now has up to six months to hold an impeachment trial. A two-thirds majority vote at the end would remove Rousseff, 68, from office for good.

A onetime Marxist guerrilla tortured under the country's military dictatorship in the 1970s, Rousseff was expected to hole up in her official residence, where she will continue to live with her mother during the trial. She will retain her salary and bodyguards.

The international community responded cautiously to the change in leadership.

In Latin America, where the Workers' Party is an emblem of a decade of left-wing dominance that lately appears to be waning, some reactions were more barbed.

Venezuela "categorically rejected" what it called a coup, Cuba expressed its "total solidarity" with Rousseff, and Nicaraguan President Daniel Ortega condemned what he called a "legal and political monstrosity."

Some economists meanwhile cautioned it would take time for Temer to turn around the dire economy, even if the markets are betting heavily on him to do just that.

"People who expect everything to get better in the short term will be disappointed. It's better to look to the medium and long term, because there are reforms and measures that can't be pushed through immediately," said Ignacio Crespo, an analyst at Sao Paulo-based consultancy Guide Investimentos.