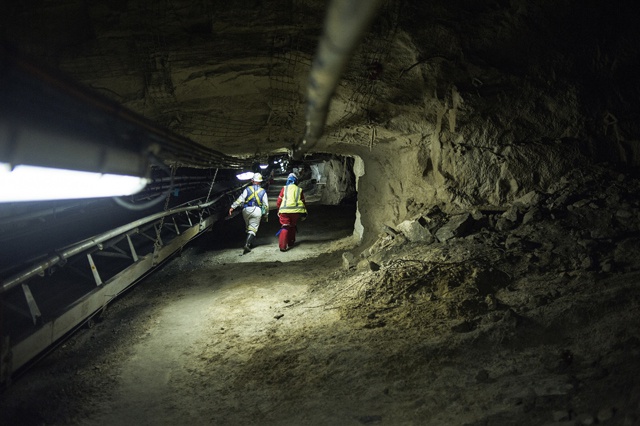 TO GO WITH AFP STORY BY SIBONGILE KHUMALO Two women miners walk through a tunnel at the end of their shift at the Anglo American Bathopele Mine in Runstenburg, North Western Province of South Africa, some 170 kms from Johannesburg, on June 11, 2015. AFP PHOTO / MUJAHID SAFODIEN
MUJAHID SAFODIEN / AFP

(AFP) - Thousands of South African gold miners and their families can pursue a multi-million-dollar class action against mining companies over fatal respiratory disease contracted at work, a judge ruled Friday.

The decision opens the way for the current and former miners to sue about 30 companies for damages after suffering silicosis from dangerous underground working conditions dating back decades.

Many miners caught silicosis, which has no known cure, from inhaling silica dust while drilling rock. The dust lodges in the lungs and causes permanent scars.

Symptoms include persistent coughing and shortness of breath, and the disease often leads to tuberculosis and death.

"We hold the view that in the context of this case, class action is the only realistic option," Judge Phineas Mojapelo told the High Court in Johannesburg.

"It is the only avenue to realise the right of access to the courts provided by the constitution."

In a separate case in South Africa earlier this year, about 4,400 silicosis victims and their families won a $32 million settlement from mining giants Anglo American and AngloGold Ashanti.

South Africa is one of the world's leading gold-producing countries, and lax labour health and labour practices during the apartheid-era contributed to the spread of work-related diseases.