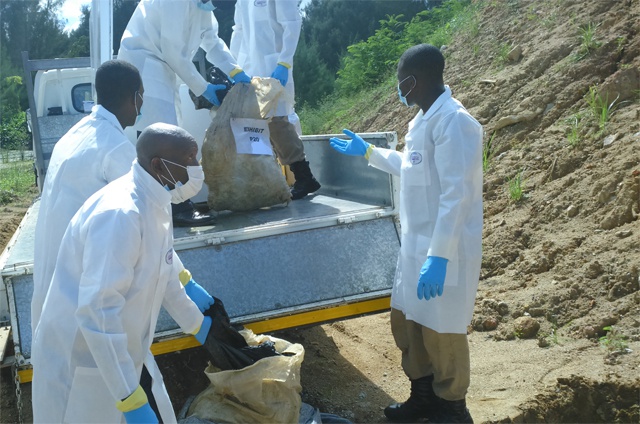 The Supreme Court ruled that some 150kg of turtle meat relating to an ongoing criminal case could no longer be kept as an exhibit as it had started to get rotten.(Ronley Fanchette)

(Seychelles News Agency) - Seychelles authorities disposed of a large quantity of turtle meat on Friday, three and a half years after it was seized as part of an ongoing criminal case.

The turtle meat relates to the December 2012 seizure of the Seychellois fishing vessel ‘Charita’ off the island of Providence. The vessel had come from the neighbouring Indian Ocean island, Madagascar.

In an action ordered by Supreme Court Justice Fiona Robinson, some 150kg of turtle meat were burnt on Friday. This was done in an area next to the landfill on the outskirts of the capital, Victoria, on the main island, Mahé.

The registrar of the Seychelles Supreme Court, Juliana Esticot, told SNA that the meat could no longer be kept as an exhibit as it had started to get rotten.

“Upon joint consent of the prosecution and all defense counsels and the Supreme Court we agreed to dispose of the meat,” said Esticot.

The disposal of the meat was done in the presence of judiciary and environment officials, two of the accused in the related case, and counsels for both the prosecution and the defense.

Esticot said in the event of an appeal, the fact that the exhibit will not be produced will not affect the case.

“The meat has already been produced as evidence in court and we have all the information on record if ever the case is brought before the Court of Appeal.”

The poaching and killing of sea turtles is illegal in the 115 island archipelago in the western Indian Ocean. Sea turtles are protected under Wild Animals and Birds Protection Act.

Possession of turtle meat can carry a fine of around $37,000 or a two-year prison sentence.

Eight men were originally arrested onboard the fishing vessel ‘Charita’, which was intercepted with 80kg of herbal cannabis, around 4kg of cannabis resin, an AK-47 assault rifle and ammunition, 154kg of turtle meat as well as sea cucumbers.

Two of the men, including the captain, turned state witness and have testified against their colleagues.

The owner of the vessel, who was not onboard ‘Charita’ when intercepted, was later arrested and is also being tried along with six crew members.

The trial started in October 2014 and is expected to end later this year.