The 'space challenge' is on! Three Seychelles' teams compete, have fun creating the best website 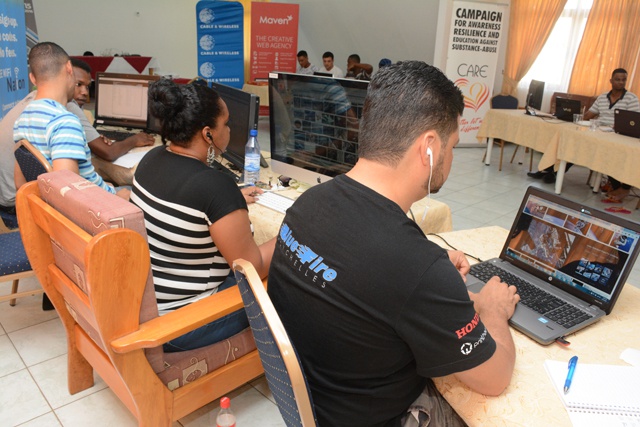 (Seychelles News Agency) - Combine talent, experience, mental and physical endurance with the aim of winning and if not, to at least have an enjoyable adventure. That is what 10 web enthusiasts in Seychelles said they are in for, taking part in the 2016 Webcup preliminaries.

The challenge -- spending 24 hours in the ‘Webcup Space Station’ during which they have to create its website, was revealed at noon on Saturday, kicking off the 24 hour contest.

Three teams, B&E comprising with two participants, Blue Fire and Up Creative Studio with four members have tried their best to stay up all night and will have to work non-stop until noon on Sunday, to come up with the most impressive web portal.

Winning teams from each islands will meet in the Webcup finals later this year.

Up Creative Studio’s Delroy Finesse said to SNA that he is hoping to pass on as much knowledge, gained through his participation in the 2015 webcup to his team mates, who are all first-timers.

Russian national, Artem Tsvetkov also a member of the Up Creative Studio team is the only non-Seychellois participant and he shares the same expectation.

“24 hours is super, I like the intensity,” said Tsvetkov.

Targeting individuals as well as teams of not more than four persons, the Webcup competition is designed for anyone with an interest in ICT be it amateurs, students or professionals.

The Seychelles Internet Exchange Point Association, SEY-IX along with the help of various sponsors is tasked with organising the event in the island nation.

Seychelles took part in the Webcup for the first time in 2014, with only five participants divided into two teams. There was an improvement last year with three teams of four showing up.

With still three teams in 2016 and a slight drop in the overall number of participants, Herve Chang-Yunn, whose team won the first Seychelles Webcup in 2014, told SNA that he is “saddened to see that not many people are showing an interest.”

While it is a male dominated competition two Seychellois women are also taking on the challenge this year.

Brigitte Santache said to SNA that she is mainly supporting her partner who works as a software architect.

“Although I am not an IT specialist the interest is there, and I am here to support my partner with his content for the website and we hope to gain the best experience from it,” Santache said to SNA.

The Principal Secretary for the Department of Information and Communication Technology Benjamin Choppy has described the competition as “a means of showcasing the technical knowhow and capabilities that are present locally also promoting interest in the sector and potentially attracting new talents to it.”

Winners of the Seychelles Webcup 2016 will be announced Sunday afternoon. On top of other prizes, the grand winners will compete in the webcup finals taking place on home soil in November 2016.

A Virality Prize will also be awarded to the team with the most likes on their Facebook page at the end of the 24 hours.

The annual Webcup was initiated by the Webcup Association of Reunion Island in 2010.

ICT » Be a reporter: Write and send your article » Subscribe for news alert
Tags: Webcup, ICT