UN alarmed about Boko Haram ties to IS 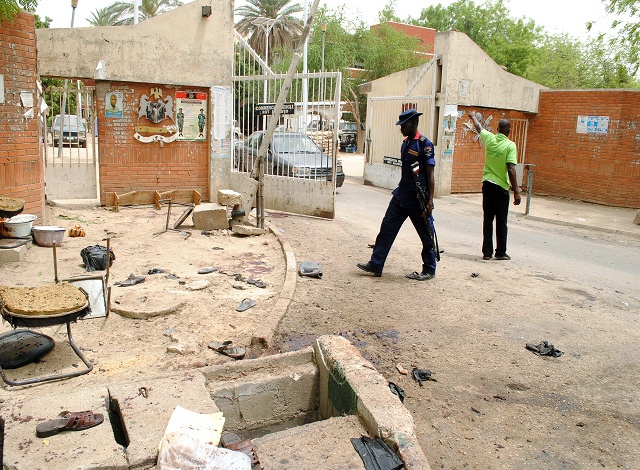 A paramilitary officer arrives at the scene of a suicide bomb attack in Maiduguri, Borno State, on May 12, 2016. Two police officers were killed when a suicide bomber tried to attack government offices in the northeast Nigerian city of Maiduguri on May 12, the military said. Army spokesman Sani Usman said the attacker blew up as security personnel stopped him from trying to get into the Borno State Secretariat to attack staff. (STRINGER / AFP)

(AFP) - The UN Security Council on Friday said it was alarmed by Boko Haram's ties to the Islamic State Group and threw its support behind a Nigerian-led regional summit to confront the threat.

The 15-member council said in a statement that it welcomed President Muhammadu Buhari's "crucial initiative" to hold the summit on Saturday, which will be attended by regional leaders and French President Francois Hollande.

The council statement was drafted by the United States as a show of support for Buhari on the eve of the meeting.

The summit should help develop "a comprehensive strategy to address the governance, security, development, socio-economic and humanitarian dimensions of the crisis," said a council statement.

The council expressed "alarm at Boko Haram's linkages with the Islamic State" and voiced "deep concern that the activities of Boko Haram continue to undermine the peace and stability of the West and Central African region."

Boko Haram pledged allegiance to IS last year and Nigerians have been reportedly fighting in lawless Libya, as well as having ties with Al-Qaeda-linked groups in the wider Sahel.

US Deputy Secretary of State Antony Blinken and British Foreign Secretary Philip Hammond are among the senior foreign dignitaries expected in Abuja on Saturday.

The council renewed its call for regional countries Cameroon, Chad and Niger in a multinational joint task force to "further enhance regional military cooperation and coordination" to root out Boko Haram.

It demanded that Boko Haram "immediately and unequivocally cease all violence and all abuses of human rights" and "release all those abducted" including the 219 schoolgirls abducted in Chibok, Nigeria in April 2014.

Boko Haram was named in the latest Global Terrorism Index as "the most deadly terrorist group in the world" in 2014. An estimated 20,000 people have been killed since 2009.

Africa » Be a reporter: Write and send your article » Subscribe for news alert
Tags: Nigeria, unrest