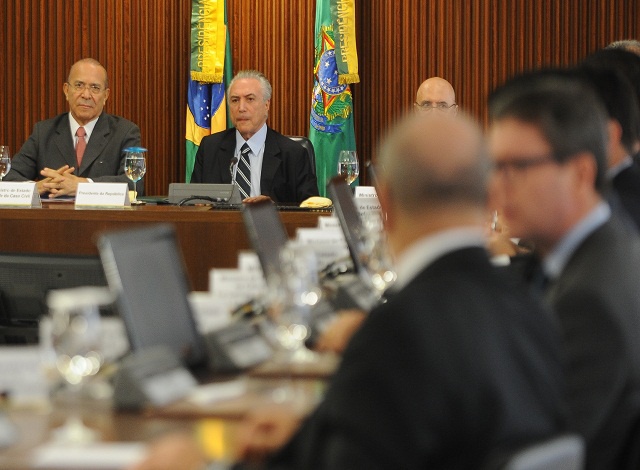 Brazil's interim President Michel Temer(2L) presides the first ministers meeting at the Planalto Palace in Brasilia next to Chief of Staff Eliseu Padilha(L) on May 13, 2016. Temer kicks off his new administration Friday, seeking to resuscitate the economy and steer clear of the corruption scandal that helped bring down his predecessor. (ANDRESSA ANHOLETE / AFP)

(AFP) - Brazil's new justice minister pledged his "full support" for an explosive corruption investigation that has a host of top politicians in its sights, including several of his colleagues.

Opponents of the new government installed by acting president Michel Temer have accused it of seeking to smother the anti-graft probe known as "Operation Car Wash," which has uncovered a multi-billion-dollar embezzlement and bribery scheme centered on state oil company Petrobras.

But Justice Minister Alexandre de Moraes said he would protect the probe's independence and even increase its funding if necessary.

"There isn't the slightest possibility of interference," said Moraes, who was previously security secretary for the state of Sao Paulo.

"Fighting corruption is the most important thing in the country, now and always," he told TV network Globo in an interview broadcast Friday.

He promptly sacked the leftist leader's ministers and installed his own business-friendly cabinet -- including three ministers under investigation in the Petrobras probe and several others whom witnesses accuse of involvement.

Temer is not under investigation himself, but some key allies are, including top leaders in his party, the center-right PMDB.

Moraes promised that would make no difference.

"The law must apply equally to everyone, regardless of name or party affiliation," he said.

Moraes is one of several controversial figures in Temer's cabinet, which supporters of Rousseff, Brazil's first female president, attacked as a throwback to another era because its members are all conservative white males.