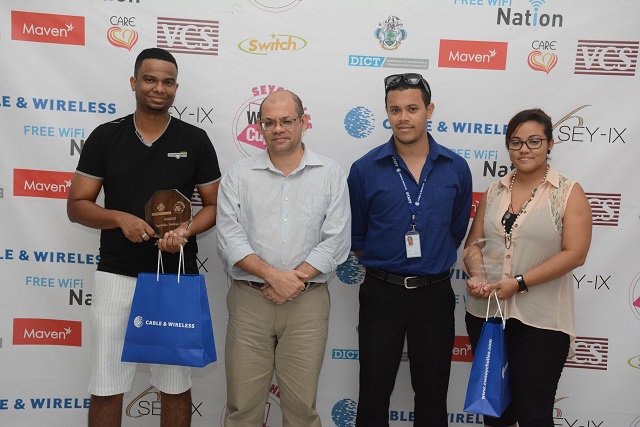 Tired and sleepy but proud duo Eddy Monthy (far left) and Brigitte Santache (far right) collecting their trophy and other prizes as the preliminary round winners of the 2016 Webcup. (Jude Morel, Seychelles News Agency)

(Seychelles News Agency) - An unexpected win during the weekend's Webcup preliminary challenge means a Seychellois duo will face international competition at the Webcup final in Seychelles later this year.

Brigitte Santache and Eddy Monthy emerged Sunday as the winners in Seychelles of the 2016 Webcup preliminaries. The 24-hour web design contest was held simultaneously in seven Indian Ocean islands.

Santache and Monthy, also a couple in real life, told SNA that they felt a bit intimidated at the start of the competition since they were a two-member team facing two teams of four members each.

"I did not expect us to win as we were first-timers and faced with people who are used to participating in the webcup. And staying awake for 24 hours is really tough if you are not used to it," said Monthy, who works as a software architect.

Monthy’s partner, although an IT enthusiast, is not involved in the field in her daily work as a rates and contract executive at Creole Travel Services. On top of that she had to leave her partner on his own to complete the project.

“I worked with him for around 9 hours and then had to leave because we have a child. So he had to work alone for some 12 hours,” said Santache, adding that winning the competition has boosted their confidence to take part in future Webcup competitions.

Spending 24 hours in the ‘Webcup Space Station’ during which they have to create its website, was the challenge revealed to the participants at noon on Saturday.

Kosta Todorovic, a member of the jury panel explained to SNA that the teams were judged on various criteria including the visual elements, technical aspect, and the way the teams interpreted the challenge.

“The interesting thing this year is that they were thrown a separate challenge which was probably designed to throw them off a little bit to have to really get creative on how they put it in,” he said to SNA. “This is the third year am judging this competition and you could see that the level is going up, although it would be nice if we had some more participation. It wasn’t easy but the winner was clear at the end.”

The wish to see more Seychellois web enthusiasts take part in the annual competition was also highlighted by the participants.

Herve Chang-Yunn, the director of marketing at the VCS group of companies, said that anyone can try their luck, as the competition is one that needs a variety of skill sets.

“You need at least some web developing skill, programming skill, but also creative ideas and people who can write, design. Having the best graphics does not necessarily mean you would win.”

A rather tired and sleepy Chang-Yunn, whose team ‘Blue Fire’ won runner-up, is hoping that the success of the duo over the other teams would motivate others to come forward.

“There’s many people out there with talent but maybe feel that they cannot put a team together as individuals. However there are governmental departments that can surely come up with a team, especially the Department of Information and Communications Technology,” said Chang-Yunn.

All three participating teams went home with a prize on Sunday; the third team Up Creative Studio grabbed the Virality Prize for having the most likes, 119 in total, on their Facebook page. All teams were also required to set up a Facebook page updating fans on their progress during the competition.

The Webcup final is expected to be held in Seychelles in November. This will be the first time the 115-island archipelago in the western Indian Ocean organises the finals of the regional competition initiated by the Webcup Association of Reunion Island in 2010.

The Seychelles Internet Exchange Point Association, SEY-IX, the Department of Information and Communications Technology along with sponsors will be working towards organizing the event, which will also see the participation of winners from Mauritius, Rodrigues, Madagascar, Mayotte, Reunion and the Comoros.

ICT » Be a reporter: Write and send your article » Subscribe for news alert
Tags: SEY-IX, Webcup, Department of Information and Communications Technology