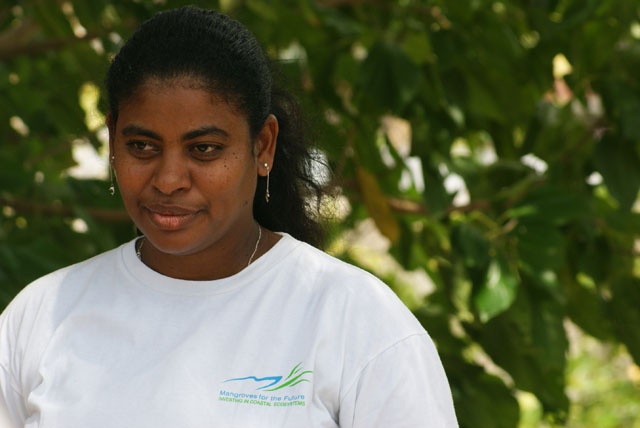 (Seychelles News Agency) - Lyndy Bastienne has never forgotten the events of Boxing Day 2004. The ripple effects of a tsunami that had hit Asia were felt in her beloved islands of the Seychelles.

The tsunami left a trail of destruction on Mahé, Praslin and La Digue which are the three main populated islands of Seychelles. Roads were destroyed several homes, schools and boats were damaged and some hotels were closed.

Bastienne who trained as a high school teacher had at the time developed a pastime for environmental education. Her spare time was mostly used with her Colibri Wildlife Club in her School of Plaisance Secondary School which is situated in the Roche Caiman district in central Mahé.

The tsunami changed Bastienne. Her part-time commitment to Colibri which was one of the many school clubs that coalesced under the Wildlife Clubs of Seychelles (WCS) was altered and became a lifelong calling.

Roche Caiman which is a district established on a reclaimed land and stands slightly over a metre above sea level had experienced the destructive part of the 2004 tsunami.

The aspect that Roche Caiman a place she loved had been marked as high risk disaster area by the Seychelles Department of Risk and Disaster Management made her to think outside her classroom. For Bastienne there had to be a way out of the words ‘risk’ and ‘disaster prone’. As a teacher she knew she could only do so much.

“I was not going to sit down and teach my students the words ‘environmental catastrophe’ and ‘risk areas’ without offering them an alternative that at least offered hope. There had to be a way out.” Bastienne recalls. “The tsunami changed me and gave me sleepless nights thinking of a solution.”

After many days of worry and research the humble teacher with little resources at her disposal stumbled upon mangroves as she sought for answers to the challenges facing her community. In the 2004 tsunami areas that were sheltered by mangroves were never affected by the natural catastrophe. Mangroves were cost effective, regenerated faster, were easy to handle as they required no specialized training and came with numerous benefits for coastal communities.

Seeking an answer, finding a solution

According to Vera Coelho of Wetlands International, mangroves not only play a crucial role in disaster risk prevention in the coastal regions but they also serve as natural assets and are among the most productive coastal ecosystems.

Wetlands International works with coastal communities across the globe to increase coastal resilience and restoring the natural capital of coastal ecosystems such as mangroves. Armed with this knowledge Bastienne set out to inculcate the mangroves mantra into her students.

Her mangroves idea had just become a game changer for an entire district. “I passed the same to my students.” Bastienne says.

At the lagoon which forms the border between Les Mamelles and Roche Caiman districts in Mahe, Bastienne and her students set out to establish a mangrove forest. “The realization that mangroves forest act as a natural defence mechanism and help in disaster mitigation and risk reduction inspired the students to adopt the mangroves project as their main outdoor undertaking,” Bastienne says.

Soon the students’ handiwork of sprouting mangroves seedlings began to attract attention from the most unlikely quarters. The Roche Caiman community, environmental non-governmental organizations, Red Cross Society of Seychelles (RCSS) and even the Seychelles government took an active interest.

This was a first for the community. Whenever community members would ask the students why they were planting mangroves the answer was always to prevent a repeat of the 2004 Boxing Day tsunami. This happened to be the community’s soft spot and won over the Roche Caiman residents into this labour intensive cause of mangroves replanting.

By 2007 Bastienne took leave from her teaching work and joined the environmental organization, Nature Seychelles. Alongside the Nature Seychelles job she continued to coordinate WCS activities. It is her side coordination job at WCS that she helped draft “Mangroves are a Must” project. This mangroves project became the first ever to be funded by the regional initiative, Mangroves for The Future (MFF).

A fully fledged community based organization the Roche Caiman Environment Action Team was set up and in 2010 -2011 took over what the students had started. Under Bastienne’s guidance MFF which was set up in 2006 through a joint collaboration of the United Nations Development Programme (UNDP) and the International Union for the Conservation of Nature (IUCN) became interested in supporting the Roche Caiman community.

MFF advanced a one year $8,000 small grant to help nurture this new community-driven environmental body.  Soon after the new community led conservation project came up with the clarion call “Roche Caiman is adapting to climate change”.

Under this theme, a door to door campaign on the importance of mangroves and coastal trees was carried out. Meetings and social events were organized with the community to discuss climate change adaptation at the local level. The main disaster risk reduction plan for Roche Caiman was coastal restoration. To achieve this endeavour the community identified three main activities. These were cleaning up the coastal areas; mangroves and trees replanting and community advocacy.

“Simple on the ground approaches grew and brought great change for the community of Roche Caiman and this intervention by the community appealed to us and we thought that we ought to be involved.” Roy Nibourette the program manager of the RCSS says.

According to Nibourette, RCSS mobilizes communities and citizens to engage in activities that will reduce the impact of disasters. Normally winning the confidence of communities and securing their commitment is the hardest part Nibourette says. For Roche Caiman the students who had simply believed their teacher was right at the time have now grown up and are powerful change agents.

“Of the three zones that make up Roche Caiman we started with one zone when the project kicked off.” Roche Caiman community leader Audrey Sanders recalls. “Midway through the project the other two zones wanted to be incorporated as they felt they are being left behind and we had no alternative but to include them.”

The word of the mangroves spreads, other districts follow

All these had started in 2006 in small measures. By 2013 the change in Roche Caiman was soon being sought as a panacea to other disaster prone localities. The contagion had spread and soon the districts of Port Glaud, Les Mamelles and Ile Perseverance who were keen to adopt Roche Caiman’s environmental disaster antidote.

Ile Perserverance shares the same geographical settings as Roche Caiman as it stands on reclaimed land. Another NGO, Sustainability for Seychelles (S4S) is currently replicating the Roche Caiman mangroves experience in Port Glaud which is in West Mahe. The idea is also catching up in the distant island of La Digue where the hard to convince fishermen are keen to adopt the idea of self-organizing after realizing of the benefits.

“It is interesting that everyone in all these communities fully appreciates that a well-managed ecosystem is the best defense for environmental disasters.” Nibourette says. “We have reached out to the entire community. We have religious leaders, social workers and even the business sector taking a keen interest in the environment.”

On weekends Bastienne visits her successful Roche Caiman project to see thriving mangroves forest taking shape. Her fixation with mangroves has led her with colleagues to write an activity book on wetlands conservation and her passion has made her one of the most prominent mangroves conservation defenders in the western Indian Ocean region.

Today Bastienne is the country coordinator of the MFF in Seychelles under the auspices of the International Union for Conservation of Nature (IUCN). She looks back at those sleepless nights and touches the mangroves leaves with fond memories recalling the scare of Boxing Day 2004.

“To this day I am fascinated at how we started and how this idea came about.” Bastienne says with a smile. “It is interesting that some solutions of nature are within nature itself.”

Wanjohi met Lyndy in August and November 2013. Travel for this article was supported by the Solution Journalism Network (SJN)