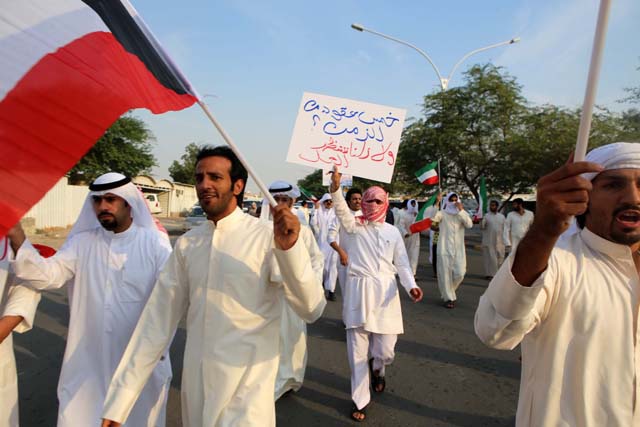 Stateless Arab, known as bidoon, take part in a protest to demand citizenship and other basic rights in Jahra, 50 kms (31 miles) northwest of Kuwait City, on November 9, 2013. (AFP PHOTO/YASSER AL-ZAYYAT)

(AFP) - The African island nation of the Comoros has said it is ready to consider taking thousands of stateless people denied citizenship in the Gulf state of Kuwait, newspapers reported on Monday.

"If the issue is raised officially, we are ready to discuss it," visiting Comorian External Affairs Minister Abdulkarim Mohamed said, when asked if his country was ready to receive Kuwait's stateless, known as bidoons.

"Yes, it is something we are ready to do if officially requested by the Kuwaiti government," he said, cited by Al-Anbaa newspaper.

More than 110,000 bidoons have been living in Kuwait for decades claiming the right to citizenship in the oil-rich emirate and the generous welfare benefits that accompany it.

But the government says only 34,000 qualify for consideration for citizenship and the rest are economic migrants from neighbouring countries or their descendants without any solid claim.

In November 2014, interior ministry assistant undersecretary Major General Mazen al-Jarrah said those bidoons not granted citizenship could be given permanent residence if they agreed to take Comorian economic citizenship.

Those who accepted the offer would be given a series of incentives, including free education and health care, and the right to work, he said.

The impoverished Comoros consist of three islands in the Indian Ocean off the coast of east Africa with a population of just under 800,000 people, nearly all of them Sunni Muslims.

Despite the country's distance from the Middle East and North Africa, it is a member of the Arab League as well as the African Union.

Several years ago, the Comoros offered thousands of bidoons in the United Arab Emirates citizenship in exchange for generous aid in a deal similar to the Kuwait proposal.