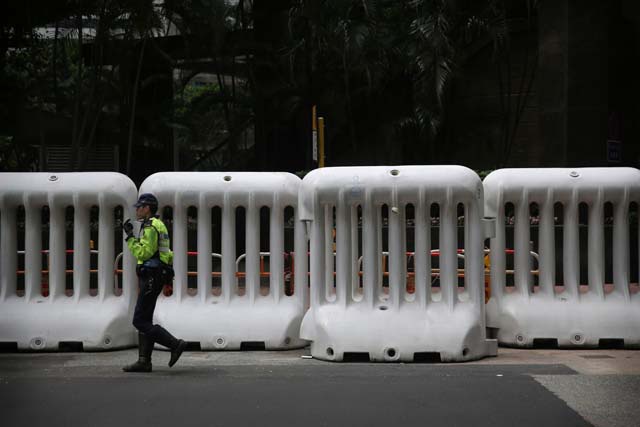 A police officer walks in front of large barricades erected along a road in Hong Kong on May 16, 2016 as authorities prepare for possible protests ahead of the visit by China's Zhang Dejiang, who chairs China's communist-controlled legislature. (ISAAC LAWRENCE / AFP)

(AFP) - One of China's most powerful officials lands in Hong Kong Tuesday in an attempt to build bridges in the divided city, but the trip has already stirred anger among opponents.

The three-day visit by Zhang Dejiang, who chairs China's communist-controlled legislature, is the first by such a senior official in four years and comes as concerns grow in semi-autonomous Hong Kong that Beijing is tightening its grip.

While Zhang is ostensibly visiting to speak at an economic conference on Wednesday, the trip is widely seen as a bid to take the temperature in an increasingly febrile political climate which has fostered a fledgling independence movement, riling China.

Zhang will meet with a group of veteran pro-democracy lawmakers Wednesday evening, a rare move observers say is designed to defuse frustrations.

"It is really time for him to meet with non-establishment legislators... to hear our analysis of how Hong Kong ended up where we are today, and what are the ways forward," Civic Party lawmaker Alan Leong, who is part of the invited group, told AFP.

However, only four pro-democracy legislators will gather with Zhang and protest groups voiced anger they were being kept away from the venue where he will speak.

The harbourfront conference centre is barricaded off and demonstrators will be confined to designated areas out of sight.

"Zhang Dejiang is coming here to understand the situation in Hong Kong but now his eyesight will be completely blocked," said Sham Tsz-kit of Civil Human Rights Front.

Paving stones in the area have been glued down to prevent protesters using them as missiles.

That comes after demonstrators dug up and threw bricks during running battles with police in February.

Police are even patrolling Lion Rock -- a hill on the other side of the harbour where pro-democracy protests banners have regularly been unfurled.

However, activists still managed to hang a banner calling for universal suffrage on a nearby hillside Tuesday morning.

Zhang's visit is expected to help Beijing gauge whether unpopular city leader Leung Chun-ying should stand for another term -- his current stint ends in March 2017.

Like all Hong Kong leaders, Leung was chosen by a 1,200-member committee stacked with Beijing loyalists.

Since then, young campaigners have become increasingly frustrated with intransigence in Hong Kong and Beijing, with some saying they will not stop at violence to force change.

Pro-democracy legislator Emily Lau, one of the group to meet Zhang, said she would portray Leung as a divisive force.

"I'm going to tell him (Zhang) that Hong Kong is facing the most difficult situation since the handover," she added.

Hong Kong is semi-autonomous since it was handed back to China by Britain in 1997, with freedoms unseen on the mainland, but there are fears they are being stripped away.

Those concerns were exacerbated by the disappearance at the end of last year of five Hong Kong booksellers known for publishing salacious titles about China's political leaders.

The men resurfaced in the mainland and four are now under criminal investigation.

Zhang is reported to be having a private dinner with Leung at his residence Tuesday night.

He will also attend a banquet with legislators Wednesday evening.