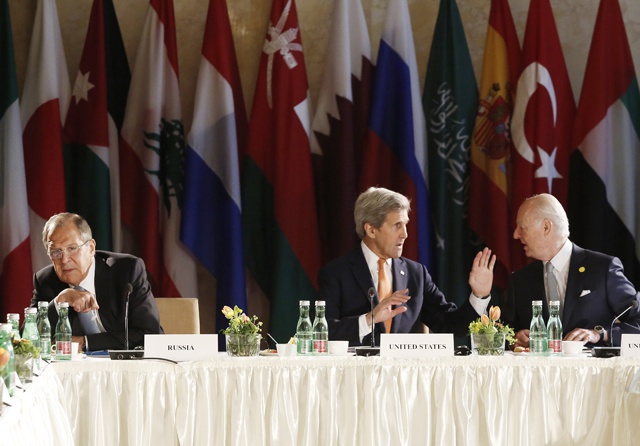 (AFP) - Senior envoys from world and regional powers gathered once again in Vienna on Tuesday in an effort to salvage stumbling efforts to halt Syria's civil war.

US Secretary of State John Kerry and Russia's Foreign Minister Sergei Lavrov -- diplomacy's odd couple, at loggerheads over much else in the world -- are chairing the meeting, which began shortly after 0700 GMT.

At the gathering, the 17-nation International Syria Support Group (ISSG) will renew its call for a nationwide ceasefire and immediate humanitarian access to besieged areas.

But headaches were likely to persist over the third plank of the plan -- a call for Syrian President Bashar al-Assad's regime and the rebels to agree on a framework for a political transition.

US officials travelling with Kerry say Washington still insists Assad should go, with an August 1 deadline for settling on the framework under which he does so.

But the Syrian president, bolstered by military support from Russia and Iran, has shown no sign he is prepared to leave.

"There is no lasting future for Syria with Assad," said German Foreign Minister Frank-Walter Steinmeier as he arrived for the Vienna talks.

"That's why we need to discuss, under the auspices of the UN, what a transition government could look like and put things on the right track," he added.

So far, UN-mediated peace talks in Geneva under international envoy Staffan de Mistura have made little headway and now even Washington's allies privately doubt the August 1 date will be met.

"The target for August is to have a framework in place, a framework agreed, for a political transition," a senior State Department official told reporters in Vienna ahead of the meeting.

"We're talking to the Russians, trying to get a better environment for the political negotiations," he said. "Particularly on the regime side."

The opposition coalition, the official said, had been more open about how they would like to see the deal negotiated but Assad's people -- while publicly backing talks -- have not engaged.

"The regime is just not there, and I think that's really the key to it," he said.

This is a key that can only be turned by Russia, if at all. Moscow, Assad's key foreign backer, supports the ISSG platform on paper but backs Syrian government forces on the ground.

Russia nevertheless endorsed the UN Security Council resolution that enshrined the ISSG peace plan in international law -- and Lavrov says he supports it.

"Today we're a long way from the finish line," he said Monday, according to official Russian news agencies.

"But if everything decided under the auspices of the ISSG and the UN Security Council is put in place honestly, then there's every chance the situation won't stay as it is."

The situation on the ground as it stands is dire.

Washington and Moscow chivvied the warring parties into a shaky ceasefire in late February, but pockets of violence remain.

A regime air strike in key battleground city Aleppo left at least three civilians dead early Tuesday, among them a mother and her young daughter, according to the Syrian Observatory for Human Rights.

And jihadist groups the Islamic State and the Al-Nusra Front, not party to the ceasefire or peace talks, still hold vast swathes of the country and carry out attacks.

In Bdama in Idlib province in the northwest, large swathes of which are held by Al-Nusra, regime strikes left eight civilians dead, including four women and three children.

Fighting has also broken out between Al-Nusra and other Islamist factions that chose to take part in the peace process, killing more than 300 fighters in recent weeks.

The Syrian war erupted in early 2011 after Assad's forces launched a brutal crackdown on anti-government protests, and has since claimed more than 270,000 lives.

Millions have been driven from their homes and a wave of refugees has joined a flow of migrants struggling to escape to Europe, causing a humanitarian and political crisis.

On the ground, US allies like Saudi Arabia and Turkey back some of the rebel factions, while Russia has dispatched war planes and advisors and Iran troops to back Assad.