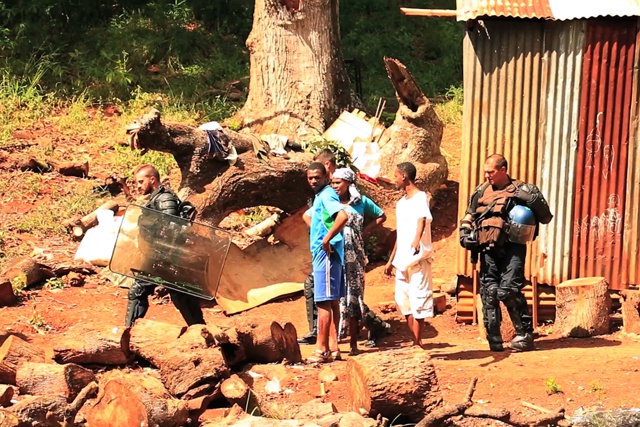 Gendarmes talk with evicted inhabitants, in the village of Koungou, in the French overseas department of Mayotte in the Indian Ocean on May 15, 2016. (ORNELLA LAMBERTI / AFP)

(AFP) - More than 500 foreigners chased from their homes on the French Indian Ocean territory of Mayotte are being cared for by volunteers, local groups said Tuesday.

Hundreds of families, most from the neighbouring archipelago nation of the Comoros, have had to sleep in the open for two nights after being forced out by local people, they said.

Since Sunday they have been camped out in a square in the island's capital, Mamoutzou.

Local groups on the island had forced them out even though most of them are there legally.

Groups hostile to the foreigners handed out leaflets calling for the action and denouncing what they said was clandestine immigration and blaming them for crimes committed on the island.

Local associations and Red Cross workers helping the families said they were trying to arrange emergency accommodation for a total of 527 people.

Local authorities have condemned the expulsions and the destruction of the families' makeshift homes, known as bangas.

Mayotte, part of the wider Indian Ocean archipelago of the Comoros, opted to remain under French rule when the other islands chose independence in 1975.

Recent weeks however have seen unrest in Mayotte. Protesters have called for more French investment in the island, where the per capita GDP, at just 7,900 euros ($8,950), is a quarter of that of mainland France.

That is still substantially more than neighbouring Comoros, from where many people come in search of work.