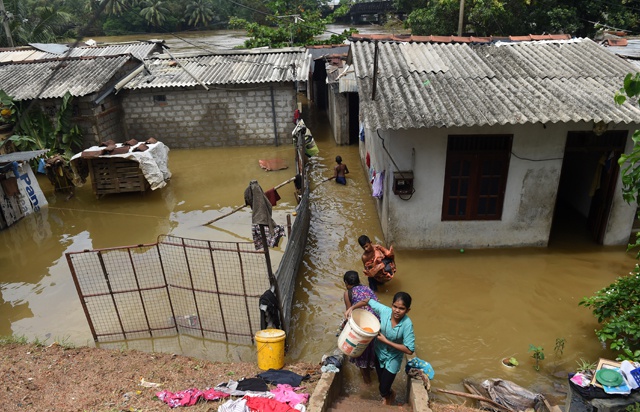 Sri Lankan residents wade through floodwaters as they go about their daily chores in Kelaniya suburb of the capital Colombo on May 18, 2016. (ISHARA S.KODIKARA / AFP)

(AFP) - Rescue workers on Wednesday recovered the bodies of 16 villagers buried in landslides in Sri Lanka after three days of torrential rains.

The disaster hit two small villages in Kegalle, a mountainous area north-east of Colombo, and take the overall death toll from flooding and landslides in recent days to 35.

Sri Lanka's government has deployed troops to evacuate people living on slopes or in flood-hit areas and the navy and the air force have also been called in to help with relief operations.

Disaster Management Centre spokesman Pradeep Kodippili said Kegalle was prone to landslides and many people living there had fled their homes after the rains.

He dismissed a statement from the Sri Lankan Red Cross that hundreds of villagers were missing, saying most had been accounted for and the death toll was not expected to rise significantly.

"Apart from the casualties in Kegalle, we have recorded 19 weather-related deaths (in recent days)," he added.

Nearly 350,000 people have been hit by flooding in Sri Lanka and 200,000 are sheltering in state-run welfare centres.

The meteorological department said the heavy rains were caused by a depression in the Bay of Bengal and were expected to subside on Wednesday.