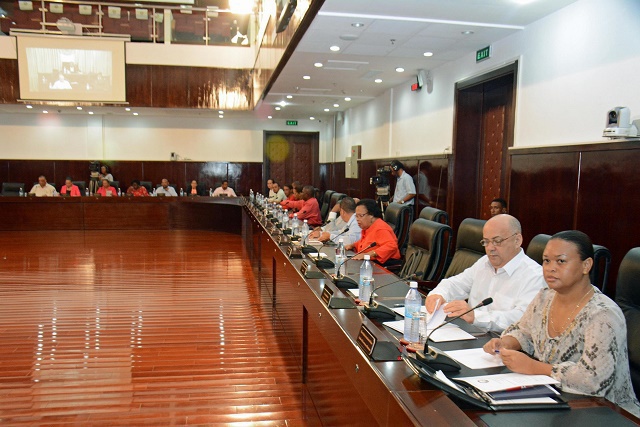 (Seychelles News Agency) - Seychelles' National Assembly has passed an amendment to the penal code that decriminalizes the act of sodomy.

The proposal was first made by President James Michel in his State of the Nation address. Island church leaders were against the proposal but said God's love applies to everyone. A leader from the gay and lesbian community said she appreciated the fact that no members of parliament voted against it.

A representative from the ruling Parti Lepep - which holds 31 seats in parliament -- said that politicians need to fight for equality, including that of sexual preference.

“While we appreciate the diversity of races, politics and religion, on the other hand as a country we are treating sexual orientation and diversity seperately,” said Chantal Ghislain, who represents the nation's inner islands.

The newly appointed Leader of the Opposition in the assembly, who attended her first sitting on Tuesday, also voted in favour.

Francesca Monnaie of the Popular Democratic Movement told SNA on Wednesday that her vote represents her party's position and is based on human rights.

“Our Constitution clearly states that all persons are equal and this is what our party believes in. So I do not see why we should discriminate against a specific group based on their sexual orientation,” said Monnaie.

“I also stated that in a democratic society like ours, this should be automatic. People should know that it has nothing to do with morality, religion or culture,” she added.

Members of the Parti Lepep who usually toe the party line when it comes to voting had been asked to vote according to their conscience.

Charles De Commarmond, member of the assembly for Cascade, said to SNA that: "We voted freely as always, there were people who were absent, who could have voted against, and if the bill was rejected we would not have been able to do anything."

De Commarmond was among the 14 who abstained.

"I abstained because I believe that the media and the Attorney General did not give enough explanation about what the new amendment entails,” he said, adding that he would have liked all actors including the civil society and the churches to also participate in the debate and express their views.

The bill presented to the National Assembly on Tuesday was seeking to amend section 151 of the penal code in order to decriminalise unnatural offences specified in paragraph (a) and (c).

Before the amendment any person found guilty of the above could have been sentenced to 14 years imprisonment.

It was in his State of the Nation Address in February that the Seychelles President James Michel announced his government’s intention to repeal the 1955 law that criminalises sodomy. The law was introduced by the British during colonial times.

Michel said the proposal was aimed at fulfilling the country’s national, international and constitutional obligations.

In 2011, Seychelles accepted to implement the recommendation of the Universal Periodic review (UPR) towards the decriminalisation of same sex relationships. The 115-island archipelago in the western Indian Ocean had to repeal the provision of the penal code to fulfil the obligation.

The government decision has given rise to a variety of opinions. Those who have spoken against the decriminalization have said that it will cause moral decadence and destroy families, and from a religious point of view people have said that sodomy is a sin and should not be decriminalized.

On the other hand some people have openly supported the amendment based on the principles of human rights and some for personal reasons.

When presenting the bill to the assembly for debate and the ultimate vote on Tuesday, the Seychelles Foreign Affairs Minister Joel Morgan said that the same arguments with regards to the constitution and international obligations used by the president to propose the amendment of section 151 of the penal code are also valid for preserving the family institution.

When addressing the proportion of the population who have said that sodomy is a sin, Morgan said that by decriminalizing the act does not mean the act is no longer a sin.

“A sin is not determined by the government but by religion. Each individual needs to follow his or her conscience on the issue.”

The issue of conscience was pointed out in a letter the Roman Catholic Bishop addressed to members of the National Assembly ahead of the vote on Tuesday.

Denis Wiehe called on them to “vote according to their informed conscience, free from all irrelevant external interference” and only taking into account “the impact your vote will have on the future of our society.”

In his letter, Wiehe stated some the teachings of the Church with regards to homosexuality.

He noted that homosexuals have dignity like every human being while also stating that all the Biblical and moral tradition of the Church teaches that homosexual acts are “morally reprehensible.”

Seychelles has a population of around 93,000 and according to the National Bureau of Statistics 76 percent of the Seychelles population is Roman Catholic, 6 percent Anglican, 2.4 percent Hindu, 1.6 percent Muslim, the rest are of other faiths.

For his part the Anglican Bishop James Wong said his church respects the parliamentarians’ decision to vote according to their conscience although a lot of the church members are against the proposed amendment.

He explained to SNA that the Anglican and other churches had already expressed their dissatisfaction with the proposal during a consultative meeting organized by the Leader of Government business in the National Assembly.

Nevertheless now that the act has been decriminalized he said that there needs to be more dialogue.

“The church is not pushing out those who are practicing sodomy or members of LBGTI [Lesbian, gay, bisexual, transgender and intersex community] but what I’m proposing is the need to establish a dialogue, where we say the doors of the church are opened and that God loves all people of earth. We have to establish a dialogue between both parties and at the end of the day, the love of God has to prevail,” said Wong.

“The church is against the repealing of the law but the church policy is that whether it has been repealed or not, life goes on. We should not discriminate against anyone,” he added.

Fabianna Bonne, the founder of the first and only advocacy group for lesbian, gay, bisexual, transgender and intersex community in Seychelles told SNA that the group appreciates the fact that no one voted against the proposal although half of those present abstained.

“The loudest message that abstaining sent was that they were not going to stand in the way of this change of law happening and we at LGBTI Seychelles appreciate that,” said Bonne.

“Our focus will now be more on educating all of our society about LGBTI as we have noted that misconceptions and negative stereotyping is very widespread on this subject. Our aim however remains full equality across all aspect of citizenship for after all, we pay our equal share of taxes and participate actively in the development of our country,” she added.

The amendment will come into force on the day it is gazetted as an act by the Attorney General’s Office. For this to happen the bill needs to be assented by the president and sent back to the National Assembly.