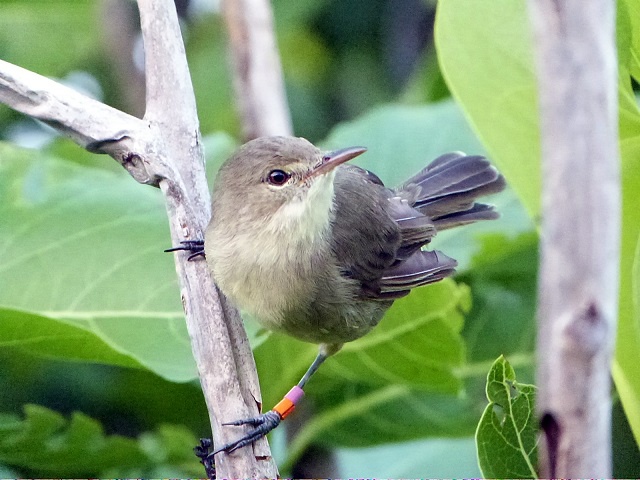 The Seychelles Warbler, the rare bird chosen to study the effects of inbreeding on the entire animal kingdom. (Nature Seychelles)

(Seychelles News Agency) - Birds of a feather may flock together, but if birds mate with family members, it's likely to lead to a shorter lifespan for the offspring.

That's the conclusion scientists reached after carrying out a genetic study of birds in Seychelles.

The Seychelles warbler was found to be the perfect candidate by evolutionary biologists seeking to pin down the effect of inbreeding on the entire animal kingdom, including on humans themselves. This is in spite of the fact that the tiny brown bird is found on only a handful of Seychelles' islands.

According to Kat Bebbington, a British PhD student at the University of East Anglia, the risk of inbreeding is particularly high in any population of animals which are small in numbers and geographically isolated.

“Lots of research is being done to try and understand how small populations avoid inbreeding, either by evolving some way of recognising relatives or making sure that offspring disperse far enough away that they will never encounter family members of the opposite sex,” Bebbington told SNA.

Bebbington is the lead author on the research paper published earlier in an online journal, Molecular Ecology, earlier in May.

The research involved the study of telomeres - the chromosome endings on DNA strands - of inbred birds, which get broken down and become shorter as they absorb all the damage experienced during life. In short, the less healthy you are, the faster your telomeres shorten and the faster you age.

The question posed by researchers was does inbreeding (mating which occurs between individuals that are closely related) have demonstrable shortening effect on telomeres, and could you use this to prove that inbreeding shortens lifespan?

A research team led by Professor David S Richardson at UEA, with collaboration from colleagues at the Universities of Sheffield and Groningen in the Netherlands, studied a population of around 320 Seychelles warblers. According to the university, a total of 1,064 DNA samples were collected from 592 birds over 14 years.

“Every year researchers monitor and sample the population to contribute to a detailed, longterm dataset containing information from individuals' entire lives across many generations,” explained Bebbington.

“For this study, we made use of this longterm data. The idea to use telomere dynamics to measure costs of various different factors was originally set out as an idea by Professor Richardson which I then developed in my studies.”

Brought back from the brink

The Seychelles warbler was rescued from extinction due to the introduction of predators such as rats and cats and other adverse effects of human habitation. After decades of efforts by Nature Seychelles, a local conservation NGO, the birds have been protected and rehabilitated. The birds now live on several islands, including Cousine, Aride, Denis and Fregate.

Making sure that extracting genetic material for DNA analysis did not cause harm to the rare birds was a top priority, according to Bebbington. The researchers count and monitor the birds from a distance to ensure their natural behaviour is not disturbed by human presence,

“We do have to catch the birds in order to measure them and take samples. To do this we use mist nets which are widely used and designed to capture birds in a safe way,” she told SNA.

Sophisticated lab equipment means that less than a drop of blood is needed - taken by pricking the wing with a tiny needle - from which all the information to analyse DNA and screen for diseases can be extracted. The birds show no longterm effects from the capture and release, she said.

For evolutionary biologists and geneticists, this research is likely to be of interest for all of the animal kingdom, including humankind.

Generally, Bebbington says that the greater body of existing evidence shows that inbreeding does cause various problems and reduce the lifespan of animals, but that the relationship between inbreeding and lifespan is a difficult one to show in the wild.

“Lifespan - or when you die - is affected by all sorts of things that could be unrelated to inbreeding,” she told SNA. “For example, being eaten by a predator, being caught in a storm, experiencing a food or water shortage."

“In this study, we used telomeres - which are known to predict lifespan, but don't come with the problems above - to show that inbreeding is indeed causing birds to die sooner.”

“Certainly I think the main message of our paper is that inbreeding can be causing real damage, even if you can't see it just by looking at how long animals live, and conservation biologists could use telomeres to monitor such damage in vulnerable populations,” said Bebbington.

“Telomeres in general could provide a simple and fairly non-invasive way of monitoring the overall health of populations - but of course this does require you to sample individuals, which requires time, experience and funding.”

For the researcher, the rewards also lie in the experience of conducting her research on the Cousin Island, which she describes as an 'amazing environment.'

Cousin Island which lies 2km off Seychelles second main island, Praslin, is a special reserve and home to an important population of endemic land birds and other animal species as well as an important breeding site for sea birds and nesting sea turtles.