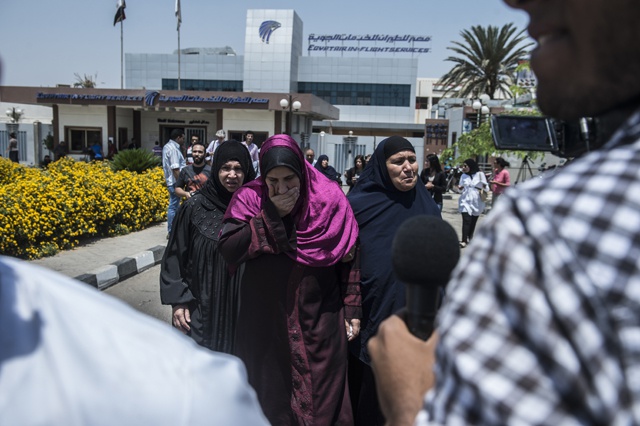 Family members of passengers who were flying aboard an EgyptAir plane that vanished from radar en route from Paris to Cairo overnight get ready to be transported by bus to a gathering point at Cairo airport on May 19, 2016. (KHALED DESOUKI / AFP)

(AFP) - Egypt's military found wreckage Friday from the EgyptAir plane that crashed in the Mediterranean as investigators tried to unravel the mystery of why it swerved suddenly and plummeted into the sea.

Search teams spotted personal belongings of passengers and parts of the Airbus A320 about 290 kilometres (180 miles) north of Egypt's coastal city of Alexandria, the military spokesman said.

Egypt's aviation minister said on Thursday that a "terrorist attack" was a more likely cause than technical failure for the plane's disappearance from radar screens on a flight from Paris to Cairo with 66 people on board.

But French Foreign Minister Jean-Marc Ayrault said there was "absolutely no indication" of why the flight came down.

"We're looking at all possibilities, but none is being favoured over the others because we have absolutely no indication on the causes," he told French television.

The tragedy raised fears of a repeat of the bombing of a Russian passenger jet by the Islamic State jihadist group over Egypt last October that killed all 224 people on board.

In Cairo, French and Airbus investigators prepared to meet their Egyptian counterparts on Friday to lay the groundwork for their investigation.

The plane disappeared between Karpathos and the Egyptian coast in the early hours of Thursday morning, without its crew sending a distress signal.

Both Egypt and Greece dispatched aircraft and naval vessels on a search mission. They were expected to be joined by French teams, while the US sent a surveillance plane to help with the operation.

Egyptian President Abdel Fattah al-Sisi had demanded an "intensified search" for the aircraft after earlier reports by the airline that wreckage from the plane had been found were retracted.

French President Francois Hollande said on Thursday that it was clear the plane had crashed, and authorities in both Paris and Cairo opened investigations.

EgyptAir said 15 French citizens were among the 26 foreign passengers on the plane, who also included a Briton and at least one Canadian.

Both France and Egypt have come under attack by IS jihadists in the past year, and Hollande promised a comprehensive probe into the cause of the crash.

IS has been waging a deadly insurgency against Egyptian security forces and last October claimed the bombing of the Russian airliner flying home holidaymakers from the Egyptian resort of Sharm El-Sheikh.

In the United States, White House spokesman Josh Earnest said it was "too early to definitively say what may have caused this disaster".

The catastrophe also entered the US presidential election campaign, where national security is a prominent issue.

Presumptive Republican presidential nominee Donald Trump said it appeared to be "yet another terrorist attack," adding "When will we get tough, smart and vigilant?"

His likely Democratic opponent Hillary Clinton agreed that it "does appear that it was an act of terrorism" and "once again shines a very bright light on the threats that we face from organised terror groups".

Greek civil aviation chief Constantinos Litzerakos said the pilot had mentioned no problem in his last communication before the plane disappeared, and the flight had not deviated from its course.

"The flight controllers contacted the pilot at a height of 37,000 feet (near Athens)... he did not mention a problem," Litzerakos told Greece's Antenna TV.

Neither the Greek coastguard nor the navy could confirm reports that a passing ship had seen "a ball of fire in the sky".

The civil aviation chief said that if there had been an explosion, any debris would have been scattered across a wide area.

The passengers also included two Iraqis and one citizen from each of Algeria, Belgium, Chad, Portugal, Saudi Arabia and Sudan, as well as 30 Egyptians, the airline said. They included a boy and two babies.

Seven crew members and three security personnel were also on board.

EgyptAir said the plane had been manufactured in 2003. Airbus said it had clocked up 48,000 flight hours.

EgyptAir hit the headlines in March when a flight from Alexandria to Cairo was hijacked and forced to divert to Cyprus, where the hijacker, who was described as "unstable", demanded to see his ex-wife.

Last October, foreign governments issued travel warnings for Egypt and demanded a review of security at its airports after IS downed the Russian airliner with what it said was a bomb concealed in a soda can that had been smuggled into the hold.