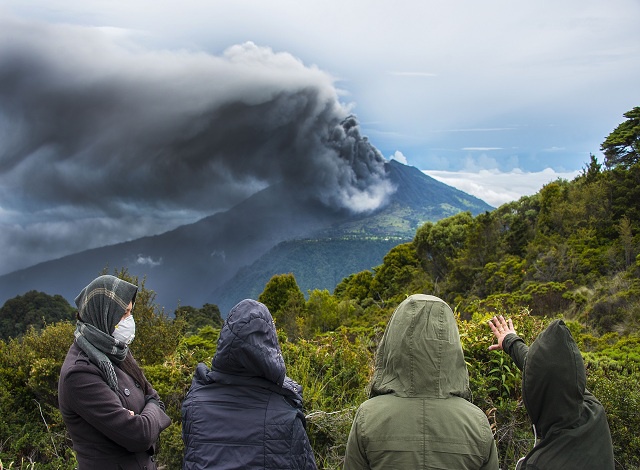 People look at the Turrialba volcano as it spewes ashes on May 20, 2016, in Cartago, Costa Rica. The Turrialba volcano started erupting columns of smoke and ash that the wind extended towards the Costa Rican capital, in what according to experts is the strongest eruption in the past six years. (Ezequiel Becerra / AFP)

(AFP) - A volcano erupted Friday near the capital of Costa Rica, choking surrounding communities with smoke and ash.

In the capital San Jose, 30 kilometers (19 miles) from the Turrialba volcano, the air reeked of sulphur as dust and ash coated buildings and vehicles.

"It seems to me to be the strongest (Turrialba) eruption in the past six years," volcanologist Gino Gonzalez said in televised comments.

He spoke to media near the site of the eruption, where a vast cloud of grey smoke was billowing from the 3,340-meter (11,000-foot) volcano.

Television channels showed footage of shuttered schools and hundreds of people flocking to hospitals with breathing and skin problems.

The National Emergencies Commission in a statement advised people to wear masks and tight clothing to protect their lungs and skin from the ash.

Gonzalez said the wind was blowing the ash and smoke westward, toward the country's most populated areas.