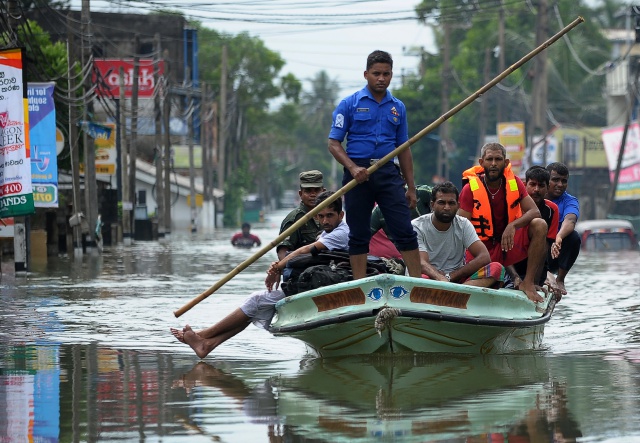 Sri Lankan navy and army personnel evacuate residents following flooding in the Kolonnawa suburb of Colombo on May 20, 2016. Desperate Sri Lankans clambered onto rubber dinghies and makeshift rafts May 20 to flee their homes in the flooded capital Colombo as fresh downpours elsewhere stalled rescue efforts at disaster zones. The heaviest rains in a quarter of a century have pounded the island since last weekend, sparking huge landslides that have buried victims in up to 50 feet (15 metres) of mud. (ISHARA S.KODIKARA / AFP)

(AFP) - Foreign aid began arriving in Sri Lanka Saturday, bringing help to half a million people who have been driven from their homes by heavy rains and landslides that have killed at least 71.

The heaviest rains in a quarter of a century have pounded Sri Lanka since last weekend, triggering huge landslides that have buried some victims in up to 50 feet (15 metres) of mud.

The number of people missing now stands at 127.

Residents clung to ropes as they battled to cross torrents of water pulsing through the streets of the flooded capital Colombo, with some forced to take shelter in rickshaws.

India has sent a military plane carrying emergency supplies to Colombo while Japan has also rushed in aid on a commercial flight, the Sri Lankan foreign ministry said.

Two Indian naval ships were also expected shortly at the port in the capital while Australia and the United States have made cash donations to help the victims.

Floodwater levels in parts of the capital subsided slightly overnight, officials said, but heavy downpours on Saturday prevented many from moving back to their homes on the banks of the Kelani river.

"But there were showers upstream and we are worried that the water levels can rise again in a day."

Nearly 300,000 people were staying in about 500 state-run relief centres on Saturday, which also marks Vesak, a Buddhist holiday.

The country's influential Buddhist clergy urged the faithful to divert at least half of the money spent on holiday celebrations to help flood victims.

"There are lots of people who have lost their homes, some have only the clothes they are wearing," top Buddhist monk Warakagoda Sri Gnanarathana said.

"Consider this your meritorious deed to celebrate Vesak."

Vesak celebrations were muted Saturday in Colombo and elsewhere compared to previous years when the entire city was decorated with lanterns and coloured lights.

Sri Lanka's navy and the air force operated boats in some of the worst-hit areas, ferrying people to shelters and taking food to those stranded, officials said.

President Maithripala Sirisena urged Sri Lankans to provide shelter and donate cash or food to flood victims as offers of assistance came in from overseas.

Officials said there had been a huge outpouring of sympathy for victims with donations of food, clothing and dry rations.

The DMC said 22 of Sri Lanka's 25 districts had been affected. Around 300,000 people have been moved to shelters while a further 200,000 were staying with friends or family.

The meteorological department says the rains were caused by a depression in the Bay of Bengal, ahead of the arrival of the southwest monsoon.

Almost a third of people had been moved from the low-lying capital, which has a population of about 650,000.

The district of Kegalle, about 100 kilometres (60 miles) northeast of Colombo, has been the worst hit, with the toll from two separate landslides rising to 39.