Getting deeper and deeper for hydrocarbon search in Seychelles waters 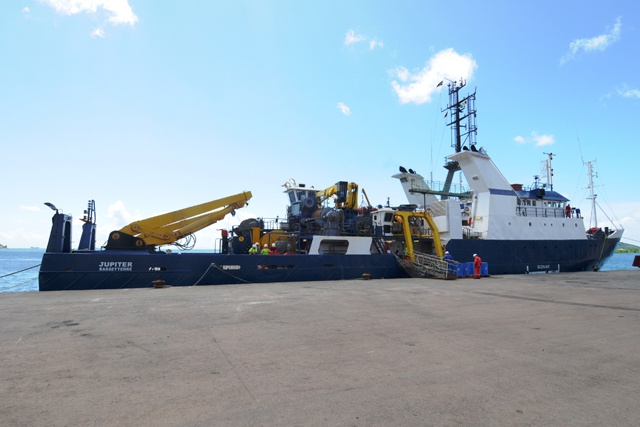 (Seychelles News Agency) - MV Jupiter, a deep ocean geographical survey ship has arrived in the port capital of Victoria in the Seychelles islands  following a 24 day voyage from Australia where it was operated as a research vessel for the Australian government.

The vessel, deployed by Marine geoscience survey company, Mg3, arrived on Saturday with a crew of eleven seamen, technicians and scientists. The 68 metre long geoscience vessel is bound for the waters of the south west of the main island of Mahé, where she will undertake a two week search for sources of hydrocarbons, including gases and petrol.

It is expected that Seychelles will soon have a clearer indication of whether the potential to start drilling for oil in the archipelago’s exclusive economic zone really exists now following the vessel's first coring survey.

Commenting on the fact that the technique of geochemical analysis of sediments will be applied for the first time in Seychelles, Eddie Belle, the Chief Executive of the state owned company responsible for regulating the hydrocarbon sector of the Indian Ocean archipelago, PetroSeychelles, said it’s a technique that will help to locate the best areas with drilling potential and therefore minimize the risk of losing money if drilling takes place and no oil or gas is discovered.

“Drilling costs a lot of money, so if they could drill at the ideal location that will lead to the discovery of oil or gas reserves, it will be better for them and they will not have spent money in vain,” said Belle.

Over the next two weeks samples of rock will be cut out from geological formations in the sea bed, to see if they have geological properties which may indicate an oil reservoir

Mg3, which has been engaged in such research for around 2 years, has been contracted as part of a joint venture between the Japan Oil, Gas and Metals National Corporation (JOGMEC) and PetroSeychelles.

The aim is to collect some 85 samples through shallow cores on the sea floor, to be sent overseas for analysis following which data obtained will be analysed together with the results obtained from a 2D seismic survey which has just ended, to get a good indication of the petroleum prospectivity of the area.'

PetroSeychelles has indicated that the choice of MV Jupiter will reduce the risk of any pollution as the latter is considered a 'green' vessel, using technology which is sensitive to the environment and reduces risk of pollution.

During her stay in the Seychelles’ waters, the MV Jupiter will be accompanied by another vessel, the SVS Monck, which will also serve as her escort ship.