Far-right on edge of power as Austria votes for president 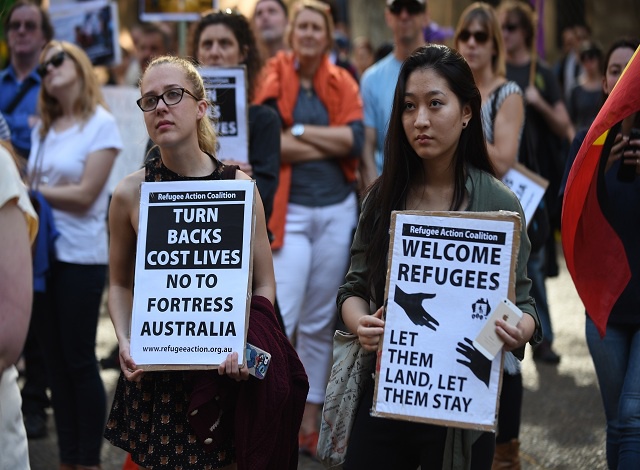 Protesters hold up placards in support of migrant refugees at a rally in Sydney on September 12, 2015. A year of rising concerns about the migrant crisis and growing unemployment has left Austria deeply polarised and driven disgruntled voters away from traditional parties toward fringe groups. (AFP/ Peter PARKS)

(AFP) - Austria's presidential runoff on Sunday could propel the European Union's first far-right leader to power, in a tense race seen as a test for the crisis-hit bloc facing mounting pressure from anti-establishment parties.

A year of rising concerns about the migrant crisis and growing unemployment has left Austria deeply polarised and driven disgruntled voters away from traditional parties toward fringe groups.

In last month's first round, Hofer -- a gun enthusiast left partially disabled after a paragliding accident -- comfortably beat his rival by 35 percent to 21 percent.

Leaning on his trademark cane, the far-right hopeful was confident of victory in his final public address on Friday.

"I will be your new president, a patron for Austria," he told a jubilant crowd at the Viktor-Adler square in Vienna's Favoriten district, an FPOe stronghold.

Hofer's win would also pave the way for the FPOe to head the next government after parliamentary elections, scheduled for 2018.

Polling stations will open at 0500 GMT, with first results expected at 1500 GMT. Final results will be announced on Monday after postal votes have been counted.

They could prove to be a tie-breaker in the race, with close to 900,000 people -- or a record 14 percent of Austria's 6.4 million eligible voters -- casting their ballot by mail this year.

Although no official surveys were released ahead of the vote, Austrian betting agencies indicated Saturday that Hofer maintained a slight lead over his opponent.

Described as the FPOe's "friendly face", Hofer has pushed populist themes with a winning smile instead of the inflammatory rhetoric used by party leader Heinz-Christian Strache.

The approach paid off, earning the FPOe its best result at federal level last month.

Meanwhile voters punished the two main parties, which were knocked out of the race with just 11 percent.

The crushing defeat means that for the first time since 1945, the president will not come from the Social Democrats (SPOe) or centre-right People's Party (OeVP).

The winner could take advantage of some of the role's never-before-used powers, like firing the government -- something Hofer has already threatened to do if the coalition fails to take a tougher line on migrants or boost the faltering economy.

European leaders including European Commission chief Jean-Claude Juncker have voiced concern at the turn of events in Austria.

"The prospect of seeing the far-right win forces me to say that I don't like them," Juncker told French newspaper Le Monde on Friday.

"The Austrians don't like to hear this but I don't care: there is no debate or dialogue with the far-right."

For now, the criticism echoes through largely empty streets in Vienna, where anti-Hofer protest calls have failed to draw large crowds.

"People don't realise what it would mean to have Hofer as president," said 25-year-old Conrad Neuwirth at a small rally outside the presidential office earlier this week.

Back in 2000, more than 150,000 people marched in the Austrian capital against the FPOe -- then led by the late, SS-admiring Joerg Haider -- after it entered a much-maligned coalition with the OeVP.

But times have changed, with support for populist parties surging across the continent.

Van der Bellen, who has the backing of many public figures including new Chancellor Christian Kern, warned Hofer's presidency would pose a threat to democracy.

"As you know, I am 72 years old and I've experienced how Austria rose from the ruins of World War II, caused by the madness of nationalism," he said.