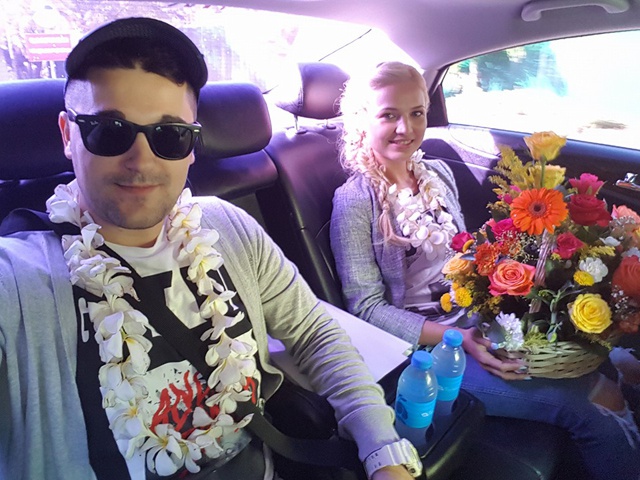 (Seychelles News Agency) - It’s a dream come true to be back in Seychelles, the winners of a free, all-inclusive VIP holiday to the island nation said on Sunday.

Romanian couple Bogdan and Catalina Matei, declared winners of the first ever 'My Seychelles Experience' video competition in March, landed at the Pointe Larue international airport onboard an Air Seychelles flight Sunday morning.

“We are on honeymoon number two,” Bogdan Matei said to SNA.

The couple, who celebrated their first wedding anniversary on May 16, spent their (first) honeymoon on the Seychelles main island, Mahé, as well as on the islands of Silhouette and St Anne in September 2015.

They recorded moments throughout their stay and created a two-minute video that they entered into an international video competition organised by the Seychelles Tourism Board and various sponsors.

Matei says it was a real challenge to select only two minutes worth of the footage of their trip filmed using a drone and a Gopro camera for the competition.

He is looking forward to making more videos, capturing their once-in-a-lifetime holiday vacation.

"I fixed my drone which broke last time. I bought extra batteries and I hope we have good weather to make an even better video," Matei told SNA.

The VIP holiday package won by the Romanian couple -- who were chosen among 47 other entries -- includes three nights in the presidential villa at the North Island resort. North Island, which lies 27 kilometres from the most populated island of Mahe, is a popular honeymoon destination among the rich and famous.

They will also spend four nights at the Four Seasons Resorts Ocean Villa in the south of the main island Mahé.

An optional two-day sea cruise exploring the inner Seychelles islands as well as other treats offered by various tourism trade partners are also in the cards.

On top of enjoying another memorable stay in the 115-island archipelago in the western Indian Ocean, Matei is hoping his wife would get pregnant, something he says did not happen on the first trip.