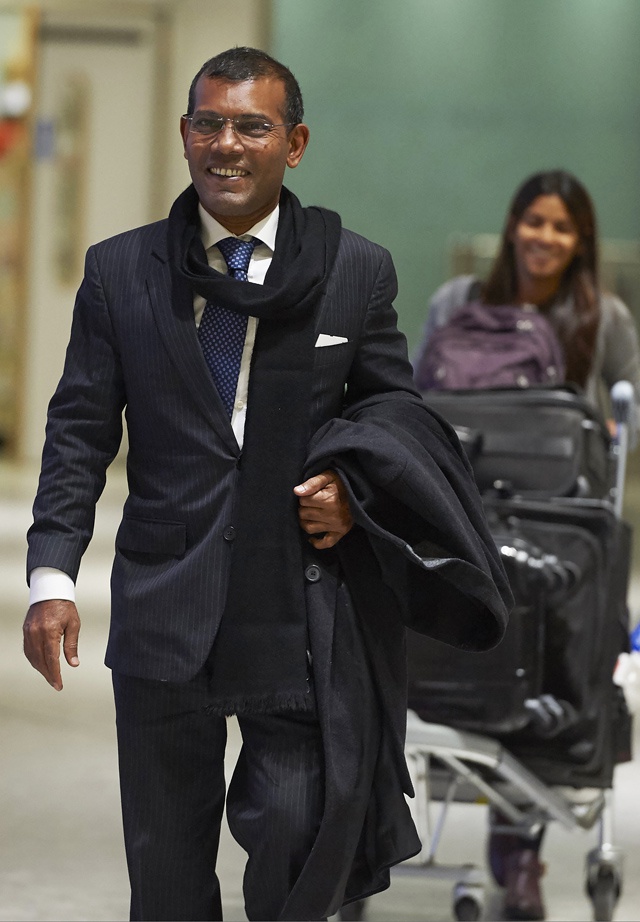 (AFP) - Former Maldives president Mohamed Nasheed said Monday he has been granted refugee status in Britain, after being toppled from power and jailed in a "slide towards authoritarianism" that has forced him into exile.

Nasheed, the country's first democratically elected leader, was sentenced to 13 years imprisonment on controversial terrorism charges last year, but was allowed to travel to Britain in January for spinal cord surgery after he fell ill.

The island nation has been rocked by political turmoil in recent years, seriously denting its reputation as an upmarket tourist destination as current leader Abdulla Yameen enforces emergency rule.

"President Yameen has jailed every opposition leader and cracked down on anyone who dares to oppose or criticise him," Nasheed, 49, said in a statement proclaiming his refugee status.

"In the past year, freedom of the press, expression and assembly have all been lost.

"Given the slide towards authoritarianism in the Maldives, myself and other opposition politicians feel we have no choice but to work from exile -- for now."

"The government of the Maldives is disappointed, if confirmed, that the UK government is allowing itself to be part of this charade, and further, is enabling an individual to circumvent his obligations under the law," it said in a statement.

Britain's Home Office interior ministry declined to confirm the former president's status when contacted by AFP, saying it did not comment on individual cases.

Nasheed was accorded a red carpet welcome and received by Prime Minister David Cameron after arriving in Britain for medical treatment in a deal brokered by the former colonial power along with Sri Lanka and India.

The United Nations has led international criticism of the treatment of Nasheed, who was elected in 2008 and served for four years before he was ousted in what he called a coup backed by the military and police.

In 2015 he was sentenced to 13 years in prison on terrorism charges relating to the arrest of an allegedly corrupt judge in 2012, when he was still in power.

The Maldives, best known as an an idyllic destination for honeymooners, has instead been in the headlines with a succession of political dramas.

Yameen is a half-brother of Maumoon Abdul Gayoom, who ruled for 30 years until his defeat by Nasheed in the country's first multi-party elections eight years ago.

In November, the Maldives parliament approved a state of emergency and sacked Yameen's estranged deputy who was arrested in connection with a blast aboard the presidential speedboat that the government says was an assassination attempt.

The impeachment was the second in just under four months -- Yameen sacked former vice president Mohamed Jameel after he accused him of trying to topple the government.

And in April Maldives police briefly arrested 16 independent journalists while breaking up a demonstration against an alleged crackdown on freedom of speech.

The Maldives last month stripped Nasheed of his pension entitlements and health insurance, after demanding he return from medical leave in Britain.