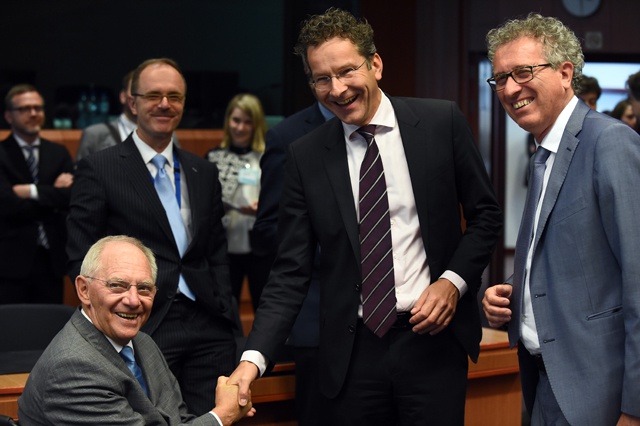 (AFP) - Eurozone finance ministers reached a vital deal with Greece on Wednesday to start debt relief for Athens as demanded by the International Monetary Fund, and to unlock 10.3 billion euros ($12 billion) in bailout cash.

The US-based International Monetary Fund had said that easing Greece's huge debt burden was a condition for its continued participation in the bailout programme, despite opposition from Germany to giving Athens more favours.

The 19 ministers from the countries that use the euro met two days after Greek lawmakers passed yet another round of spending cuts and tax hikes demanded by its creditors.

After hammering out a deal at late night talks in Brussels, Eurogroup chief and Dutch Finance Minister Jeroen Dijsselbloem said the ministers had achieved a "major breakthrough".

Greece urgently needs the next tranche of bailout money to repay big loans to the European Central Bank (ECB) and IMF in July, and has already fallen behind in paying for everyday government duties and wages.

Dijsselbloem said the ministers had agreed to unlock the 10.3 billion euros -- the windfall for completing the first formal review of its 86 billion euro bailout programme agreed last July.

Greece's creditors would pay a first 7.5 billion tranche in June and the rest in a series of later disbursements.

The hardest part of the talks was diffusing the row between Greece's creditors, the eurozone governments and the IMF, over the state of the Greek economy and debt relief.

"The Eurogroup agreed today on a package of debt measures which will be phased in progressively," said Dijsselbloem, who is also the Dutch finance minister, adding he was "glad to confirm" the IMF would now stay on board.

In a brutal report on the eve of the Eurogroup meeting, the IMF had warned that Greek public debt at the current level of about 180 percent of gross domestic product was unsustainable and must be reduced.

The IMF darkly added that without restructuring the debt load could soar to as much as 250 percent of output by 2060.

"We welcome that it is now recognised by all stakeholders that Greek debt is unsustainable," Thomsen said in a rare public appearance in Brussels.

Germany, the eurozone's economic powerhouse, had been deeply opposed to alleviating any of Athens' debt and claims it is not necessary for now.

But fortunately for Athens, Germany also firmly wanted the pro-reform IMF to remain in the bailout and Berlin will have to cede ground on debt relief to achieve that.

German Finance Minister Wolfgang Schaeuble earlier conceded that "without the IMF on board, there is no programme" and added that "we have no quarrel with the IMF".

Dijsselbloem said it had been a difficult political agreement.

"This is something that I couldn't have dreamed of a month ago," he said.

"I think the ministers have stretched their political capital to put this on the table. This is stretching what I would have believed possible a short time ago."

The talks on Tuesday come after Greek lawmakers narrowly adopted another batch of controversial reform commitments.

The measures included the establishment of a new privatisation fund that will manage Greece's public assets independently from state meddling.

Ecological disaster on Greek island as fire burns on