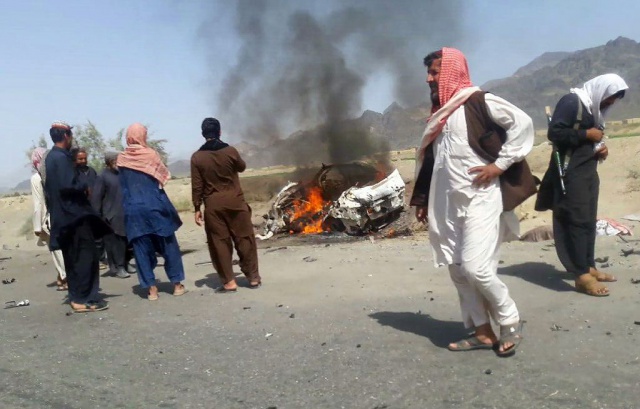 The drone attack was the first known American assault on a top Afghan Taliban leader on Pakistani soil. (AFP Photo)

(AFP) - The Afghan Taliban on Wednesday announced Haibatullah Akhundzada as their new chief, elevating a low-profile religious figure in a swift power transition after officially confirming the death of Mullah Mansour in a US drone strike.

The surprise announcement coincided with a Taliban suicide bombing near Kabul which killed at least 10 court employees in what was termed a revenge, illustrating the potency of the insurgency despite the change of leadership.

Akhundzada is seen as a unifying figure in an increasingly fragmented militant movement, though it remains unclear whether he will follow Mansour in shunning peace negotiations with the Afghan government.

"Haibatullah Akhundzada has been appointed as the new leader of the Islamic Emirate (Taliban) after a unanimous agreement in the shura (supreme council), and all the members of shura pledged allegiance to him," the insurgents said in a statement.

It added that Sirajuddin Haqqani, an implacable foe of US forces, and Mullah Yakoub, the son of Taliban founder Mullah Omar, were appointed his deputies.

"The leader of Islamic Emirate of Afghanistan and commander of faithful, Mullah Akhtar Mansour, was martyred, in a US drone strike in... Pakistan's Balochistan province," the statement said, in the insurgents' first confirmation of his death, using the Taliban's official name.

US President Barack Obama, who authorised the drone strikes, had confirmed the death Monday. He said Mansour had rejected efforts "to seriously engage in peace talks", asserting that direct negotiations with the Afghan government were the only way to end the attritional conflict.

"I don't foresee any shift from Mansour's policies. He is unlikely to negotiate with the Afghan government."

Other observers say Akhundzada, who was one of two deputies under Mansour, is seen as more of a religious figure than a military commander.

"Even if he favours peace talks, he is unlikely to proceed without consensus within the supreme council" where many vehemently oppose negotiations, said analyst Amir Rana.

The US killing of Mansour showed that Washington has at least for now abandoned hopes of reviving the direct peace talks between Kabul and the Taliban which broke down last summer.

It marked a significant shift for Washington, highlighting a new willingness to target the group's leaders in Pakistan and risk retaliatory attacks against struggling Afghan security forces.

Saturday's drone attack, the first known American assault on a top Afghan Taliban leader on Pakistani soil, sent shockwaves through the insurgent movement which had seen a resurgence under Mansour.

He was killed just nine months after being formally appointed leader following a bitter power struggle upon confirmation of founder Mullah Omar's death.

The Taliban's supreme council held emergency meetings that began Sunday in southwest Pakistan to try to find a unifying figure for the leadership post.

Taliban sources told AFP council members were lying low and constantly changing the venue of their meetings to avoid any fresh air strikes.

The Taliban said Wednesday's suicide attack in Paghman district near Kabul was in revenge for the execution of six Taliban-linked inmates.

The executions earlier this month were approved as part of Afghan President Ashraf Ghani's new hardline policy against the insurgents after a brazen Taliban attack in April killed at least 64 people.

Taliban vows to fight on after Trump says talks are 'dead'

US, Taliban push for peace in day 2 of talks