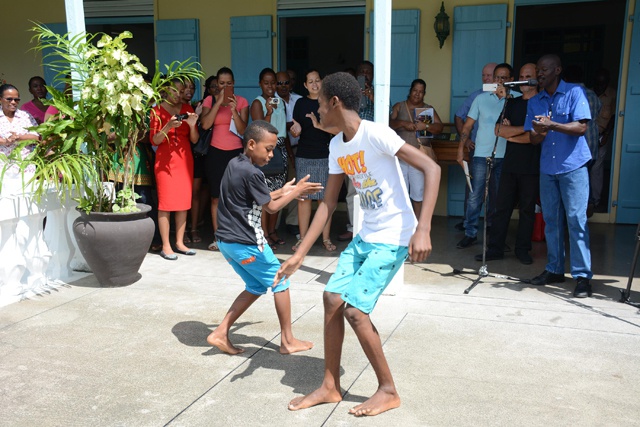 A rare performance of tinge -- a mixture of playful and combat moves characterized by the clapping of hands and no musical instruments. (Joena Bonnelame, Seychelles News Agency)

(Seychelles News Agency) - A newly published document sheds light on the history, practice and the need to preserve the tinge – a traditional dance that is a slowly disappearing cultural legacy of Seychelles.

The publication -- ‘The role of folklore and music in the promotion and preservation of culture -- A special focus on Tinge,’ was launched Wednesday as part of ‘Fet Afrik -- an annual, weeklong celebration of Seychelles' African heritage.

The Creole Institute’s Cindy Moka told SNA that the document can now be used to help Seychelles in its quest to gain international recognition and preservation of the dance form.

“It has been difficult for tinge to get recognized like the popular traditional dance moutia, because unlike moutia it is not popular and therefore not practiced by many,” Moka told SNA.

Moka coordinated a forum on the traditional dances of Seychelles, with tinge being the main focus, in October 2014 during the annual Creole Festival. The resulting document prepared by the Creole Institute and University of Seychelles has taken into consideration discussions that took place on the history of the dance, how it is practiced and recommendations on how to promote it among the younger generation, to ensure its survival.

The island nation seeks to build a case requesting the United Nations Educational, Scientific and Cultural Organisation, UNESCO, to consider having the tinge on its list of intangible heritage.

“This document will now help Seychelles to prepare its case and hopefully have it [tinge] recognized as endangered hence the importance of its preservation,” said Moka, adding that the task has been given to the National Heritage Research and Protection Section.

Seychellois Gaetan Landry, originally from Silhouette, the Seychelles’ fourth-most populated island has been the main contributor of information contained in the document, as he is considered a master of this form of dance.

“I am happy that the tinge is finally being given the attention it deserves and there are attempts to keep it alive,” Landry told SNA on Wednesday.

He is among the few islanders who still practice the dance, which is a mixture of playful and combat moves, mainly characterized by the clapping of hands and no musical instruments.

Originating from mainland Africa, tinge involves two persons who dance facing each other and try to see who will outshine the other by stomping on the person’s foot. This is done while other participants clap and sing.

Landry explained that although sung in Creole, one of the three national languages of the 115-island archipelago in the western Indian Ocean, tinge is usually sung in a language that is indecipherable -- believed to originate from Africa.

Excerpts of songs used during the tinge dance are featured in the 30-page document, which also illustrates the two main movements of the dance.

“Troke pitches the left foot against the right foot and vice versa while in the vis-à-vis movement, the opponents’ left and right feet will move together,” explained Landry.

Landry’s attempts to teach people in Seychelles to dance the tinge have proved unsuccessful, due to a lack of interest.

“I am yet to meet people in Seychelles who are interested in learning and teaching this dance to others, and it is really sad,” he told SNA.

Nevertheless, he is quite happy that he is able to pass on the knowledge to people from other cultures.

“I taught the dance to members of The Boite Millenium Choir during one of my trips to Australia last year and they were eager to learn and it is a pity that this is yet to pick up in Seychelles, where our forefathers practiced this dance,” he said to SNA. Landry is a member of Australian traditional band -- The Boite Millenium Choir – although not residing in Australia – a country he visits at least twice a year.

Locally, in spite of the reluctance of the general population, Landry has now decided to teach his two young sons, Leandro and Darrel, who like their father have taken a liking to tinge.

They displayed how skilful they’ve become on Wednesday by performing for guests, at the launching of the new publication at the Creole Institute in Au Cap, in the south of Mahé.