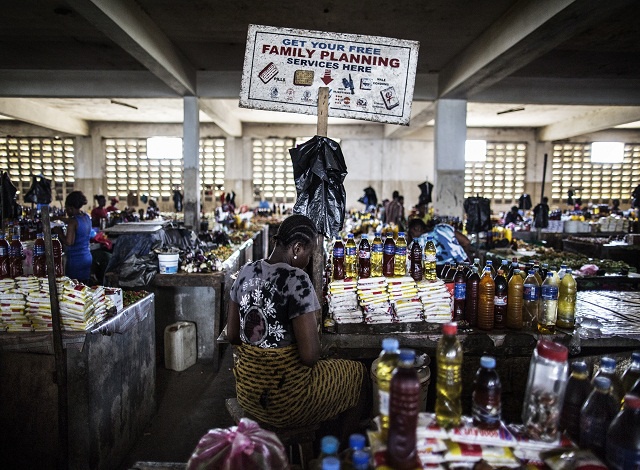 A woman sits by her stall in the Jorkpan market at Sinkor district in Monrovia, on May 2, 2016. (MARCO LONGARI / AFP)

(AFP) - The last remaining United Nations sanctions on Liberia were lifted on Wednesday in a decision the United States called a tangible sign of progress in the West African country.

The UN Security Council voted unanimously to lift an arms embargo on non-state groups that was imposed 13 years ago to support a peace deal that ended a devastating war.

It was the last punitive measure in force from a sweeping series of sanctions that had included travel bans, assets freezes and a ban on lumber and diamond exports.

US Deputy Ambassador David Pressman said the decision showed "how far Liberia has come" in its transition to peace and marked the first time since 1992 that the country was not under UN sanctions.

Liberia's charge d'affaires George Patten told the council that sanctions had helped stabilize the country and that the government was now ready to take steps to beef up security.

"Targeted sanctions in the context of Liberia have been very constructive," said Patten.

With the international measures now all lifted, Liberia has adopted gun-control legislation and is taking steps to strengthen control of its borders, he said.

The United Nations is also drawing down its peacekeeping mission in Liberia, UNMIL, which now has some 3,700 troops and police on the ground from its high point of 15,000.

On June 30, a security transition will be completed, handing over much of the mission's tasks back to Liberian police and army. By then, there will be fewer than 2,000 UNMIL personnel left.

The council is discussing when to end the mission that helped Liberia during the deadly Ebola outbreak and may still be need as the country heads toward elections next year.

UN Secretary-General Ban Ki-moon said the council's decision showed the "significant progress made by Liberia and the sub-region in maintaining stability."

The end of sanctions on Liberia came a few weeks after the council lifted the last remaining measures against Ivory Coast.

There is a sharp debate within the council on whether sanctions are a useful tool, with China, Russia and Venezuela arguing that they often fail to encourage better behavior.

Pressman argued that the council "must be creative and courageous in its sanction design," and pointed to the timber and diamond export bans in Liberia as a pressure tactic that could be applied to other conflicts.

Liberia has spent a decade recovering from two ruinous back-to-back civil wars that ran from 1989 to 2003, leaving a quarter of a million people dead and the economy in tatters.

Liberia's ex-president Charles Taylor is serving a 50-year sentence in a British jail for war crimes for his role backing militias that rampaged across Sierra Leone during its civil war.