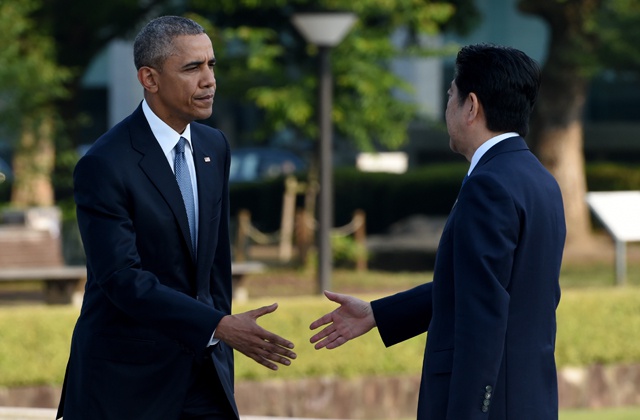 US President Barack Obama (L) shakes hands with Japanese Prime Minister Shinzo Abe (R) after laying a wreath at the cenotoph in the Peace Momorial park in Hiroshima on May 27, 2016. Obama became the first sitting US leader to visit the site that ushered in the age of nuclear conflict.
TOSHIFUMI KITAMURA / AFP

(AFP) - Barack Obama paid moving tribute to victims of the first atomic bomb Friday and called for a world free of nuclear weapons, during a historic and emotional visit to Hiroshima.

In a ceremony loaded with symbolism, the first sitting US president to visit the city met survivors of the fearsome attack that marked one of the final, terrifying chapters of World War II.

"71 years ago, death fell from the sky and the world was changed," Obama said of a bomb that "demonstrated that mankind possessed the means to destroy itself".

"Why did we come to this place, to Hiroshima? We come to ponder a terrible force unleashed in the not-so-distant past. We come to mourn the dead," he said.

Obama, accompanied by Japanese Prime Minister Shinzo Abe, offered a floral wreath in front of the cenotaph before pausing in momentary contemplation, closing his eyes and lowering his head.

The site lies in the shadow of a domed building, whose skeleton has been left standing in silent testament to those who perished.

Abe followed by offering his own wreath and a brief, silent bow.

After both men had spoken, Obama, whose predecessor Harry Truman made the decision to launch the world's first nuclear strike, greeted ageing survivors and embraced one elderly man who appeared overcome with emotion.

He also chatted with a smiling Sunao Tsuboi, 91, who had earlier said he wanted to tell the US president how grateful he was for his visit.

The bombing claimed the lives of 140,000 people, some of whom died immediately in a ball of searing heat, while many succumbed to injuries or radiation-related illnesses in the weeks, months and years afterwards.

A second nuclear bomb was dropped on the city of Nagasaki three days later.

Coming in Obama’s final year in office, the visit also marks seven years since he used his trademark soaring rhetoric to call for the elimination of atomic arms in a landmark speech in Prague that helped him win the Nobel Peace Prize.

And while the world today appears no closer to that lofty vision, Obama used the symbolism of his presence in Hiroshima to highlight a push for peace, reiterating his call for a "world without nuclear weapons".

Anticipation was high in Hiroshima ahead of the visit, where crowds of Japanese and foreigners gathered near the park where Obama appeared.

"I hope this historic visit to Hiroshima will push for the movement of abolishing nuclear weapons in the world."

Japanese and American flags flew on the street in front of the site, with a city official saying it was the first time the Stars and Stripes had been raised there.

As expected, Obama offered no apology for the bombings, having insisted that he would not revisit decisions made by Truman at the close of a brutally fought World War II.

"Technological progress without equivalent progress in human institutions can doom us. The scientific revolution that led to the splitting of the atom requires a moral revolution as well," he said.

As an eternal flame flickered behind him and crows called out through the hush of the park, Obama spoke of the purpose of his visit.

"This is why we come to this place, we stand here, in the middle of this city and force ourselves to imagine the moment the bomb fell.

"We force ourselves to feel the dread of children confused by what they see. We listen to a silent cry."

"The world was forever changed here but, today, the children of this city will go through their day in peace," the US president said. "What a precious thing that is."

Though some in Japan had called for a statement of remorse, public opinion welcomed his visit as a major step forward in relations between the two countries.

Obama's reputation as a world leader with a history of calling for the elimination of nuclear weapons seemed to help.

Nevertheless, some in Japan feel the attack was a war crime because it targeted civilians, though many Americans say it hastened the end of a bloody conflict, and ultimately saved lives.

The visit has drawn less sympathetic reactions in other Northeast Asian countries where historical disputes with Tokyo over wartime and colonial aggression remain raw.

"Obama is seized with the wild ambition to dominate the world by dint of the US nuclear edge," the agency said.

And in Beijing, the government-published China Daily newspaper ran a headline saying: "Atomic bombings of Japan were of its own making."