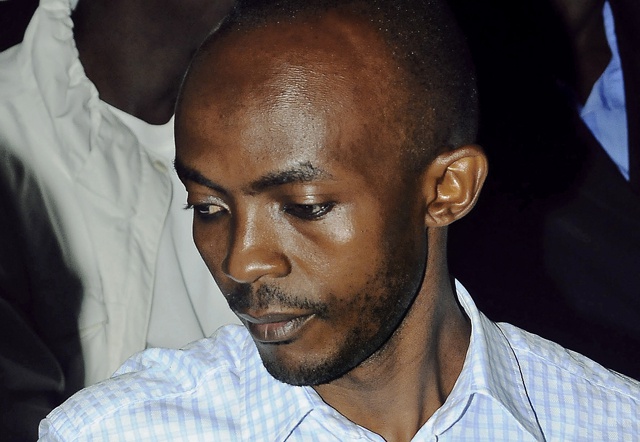 Kampala 2010 World Cup bombing suspect, Issa Luyima, who was considered the mastermind behind the attacks, sits in Kampala High Court, on May 27, 2016. (RONALD KABUUBI / AFP)

(AFP) - A Ugandan court on Friday handed down a life sentence for the mastermind of twin bombings targeting football fans in Kampala that killed 76 people.

The court also sentenced four accomplices to life behind bars for the 2010 suicide attacks, while two others received 50-year sentences.

They faced the death penalty but their lawyers pleaded for lighter sentences on the grounds that they were young and had been brainwashed.

Judge Alfonse Owiny-Dollo said: "I do not think that the death penalty would assuage the victims and give closure to the indelible pain that society has suffered."

He said the act targeting "innocent people... is most repugnant and cannot be justified by whatever cause. Indiscriminate killing must attract a corresponding punishment."

The attacks claimed by Somalia's Al-Shebab jihadist group targeted fans watching the World Cup final between the Netherlands and Spain at a restaurant and at a rugby club in the Ugandan capital.

Of the 13 men tried, seven were convicted of terrorism, murder and attempted murder. They came from Uganda, Kenya and Tanzania.

The ringleader, Issa Ahmed Luyima, left Uganda the day before the blasts to evade arrest and threw the cellphone used to coordinate the attacks into a pit latrine but it was later found.

Two men were already convicted in 2011 for their role in the attacks.

Edris Nsubuga, who admitted terrorism charges, was spared the death penalty because he expressed contrition over the carnage and was jailed for 25 years.

The other man, Muhamoud Mugisha, received five years for conspiracy to commit terrorism.

- 'Justice has been delivered' -

"I think under the circumstances of this case the sentence looks fair," defence lawyer Caleb Alaka said, while Jane Okuo, a spokeswoman for the prosecutor's office, added: "Justice has been delivered."

The Kampala trial was delayed after the lead prosecutor was murdered in March 2015. Joan Kagezi, acting assistant director of public prosecution, was shot dead by men on a motorbike as she drove home with three of her children.

The Kampala blasts were the first attack outside Somalia by the Al-Qaeda-linked Shebab and were a revenge attack against Uganda for sending troops to the war-torn country.

Thousands of Ugandan troops form the backbone of the African Union Mission in Somalia (AMISOM), the UN-backed force established to fight the Shebab Islamists and protect the internationally recognised government.

The Shebab still targets countries in the region, carrying out the 2013 assault on the Westgate Mall in Nairobi that killed at least 67 people, and the attack on Kenya's Garissa university in April 2015, killing at least 148 people.

Although the main Shebab force is Somali-led and operates mainly inside southern Somalia, it has since branched out with franchises operating in regional nations.

Conflict 'behind us', Ivory Coast's Ouattara says after greeting rival

Kabul in mourning after deadliest attack in 15 years