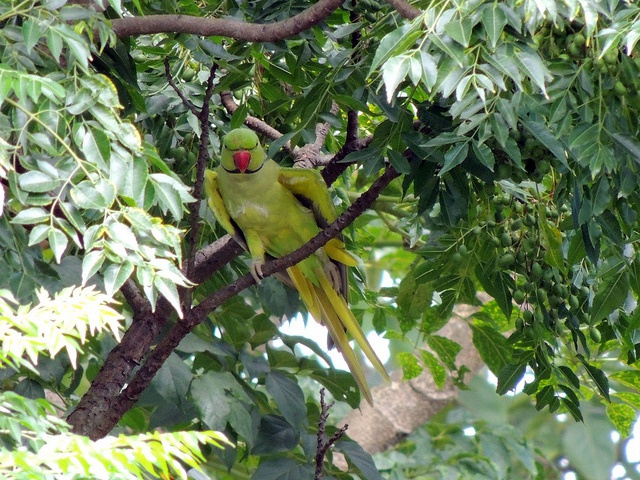 The ring-necked parakeet is an invasive bird which pose a threat to the endemic birds of Seychelles, especially the black parrots. (nbu2012/Flickr) Photo License: (CC BY 2.0)

(Seychelles News Agency) - An eradication campaign to rid Seychelles of the ring-necked parakeets is now in the final stages, the Seychelles Islands Foundation, SIF, has said.

A team of hunters from New Zealand armed with rifles are tracking the last remaining birds in the western region of the Seychelles main island, Mahé.

“We are currently concentrating our efforts in the Port-Glaud district,” the project coordinator, Laurent Leit, said to SNA.

As they pursue what is believed to be one of the last of the remaining ring-necked parakeets, the hunters are facing mountainous terrain which makes it difficult to track the bird.

According to Leit, there is also the problem of spotting the green parakeets, as they blend in well with the dense, green vegetation.

“These birds are very intelligent. If you’ve attacked them in one spot and they managed to escape, they will not return to that same spot and this makes our work more difficult,” said Leit.

It is believed that the ring-necked parakeets, better known as the ‘Kato Ver’ [green parrots] due to its green colour, was introduced in Seychelles as early as 1970 as a caged pet. The bird managed to get into the wild some years later.

Other than being a threat to native birds of the 115-island archipelago in the western Indian Ocean, the species is also a nuisance to farmers and owners of home gardens as they feed on fruits especially their seeds, even before they are ripe.

Several eradication programmes have been implemented as early as 2003, but to no avail. The current campaign started in 2013, when the estimated number of the green bird was said to be between 300 to 400.

According to Laurent Leit, the number was surely much higher as over 500 birds have been killed since the eradication project began.

“They usually nest in the Anse Royale region, in the east of Mahé, and during the day they migrate to other districts in the western region of the island,” said Leit.

Although the bird is mostly restricted in numbers across mainland Mahé, a few sightings have been reported on Praslin and Silhouette, the second- and fourth-most populated islands.

The greatest fear for the Seychelles Island Foundation and other environment authorities is the threat posed by the green bird to the endemic birds of Seychelles.

This is mainly the black parrot found in the UNESCO heritage site, Vallée de Mai, on the Seychelles second-main island, Praslin. Vallee de Mai is the home of the entire black parrot population which stands below 1000.

The ring-necked parakeets prefer the same nesting habitats and food as the black parrots. They are also carriers are certain diseases that are likely to infect other bird species.

The Seychelles Island Foundation, SIF, have received financial assistance from the European Union, to eradicate the species on Mahé, to prevent it from migrating to Praslin, located some 45km away.

“The ring-necked parakeets are highly invasive and if they manage to reach Vallee de Mai, they will definitely destroy the local species,” said Leit.

Since last month the SIF has also introduced a $15 reward for anyone who reports the confirmed sighting of the invasive bird. A $150 reward is also paid for any sightings which lead to the culling of the bird, which has to be done by the eradicating team. Interestingly, although the green colour is most associated with the bird, in Seychelles the ring-necked parakeet can be spotted in two colour variations: green or yellow.