Messi due to go on trial in Spain for tax fraud 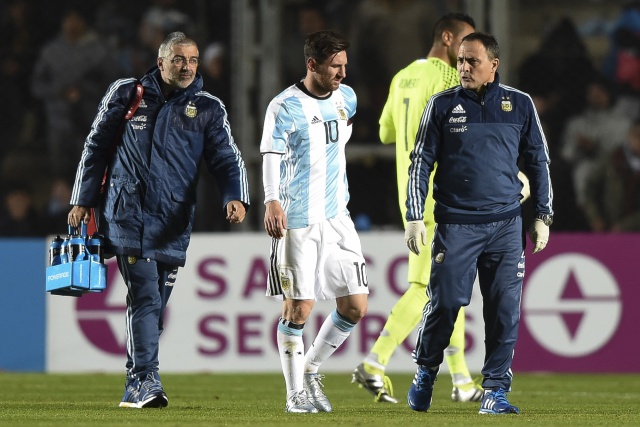 Argentina's forward Lionel Messi (2-L) leaves the court during a friendly football match against Honduras at Bicentenario stadium in San Juan, some 1110 Km west of Buenos Aires on May 27, 2016. (EITAN ABRAMOVICH / AFP)

(AFP) - Argentina star Lionel Messi, one of the world's highest-paid athletes, goes on trial in Barcelona on Tuesday for allegedly defrauding Spain of over four million euros in unpaid taxes.

After winning a league and Cup double with Barcelona, the five-time World Player of the Year and his father will confront in court the accusations that have dogged him since June 2013.

The trial will run until June 2 -- the day when Messi is due to testify along with his father.

The court appearance comes just days before he joins his Argentina teammates for the Copa America in the United States.

Argentina take on defending champions Chile in their first game of the tournament in California on June 6.

Messi and his father, Jorge Horacio Messi, are accused of using a chain of fake companies in Belize and Uruguay to avoid paying taxes on 4.16 million euros ($4.7 million) of Messi's income earned through the sale of his image rights from 2007-09.

They have been charged with three counts of tax fraud.

Spanish prosecutors are seeking a jail sentence of 22-and-a-half months for Messi and his father if they are found guilty, plus fines equivalent to the amount that was allegedly defrauded.

But any such sentence would likely be suspended as it is common in Spain for first offences carrying a sentence of less than two years.

Under Spanish law, a defendant is not obliged to attend the full trial if prosecutors seek a jail sentence of less than two years, which means Messi may only show up on June 2 for his testimony.

The football star and his defence team have argued that the player's father handled his finances without reporting to him, and that the striker was not aware of any wrongdoing.

"My dad handled the cash," Messi said in September 2013 when he was questioned by a judge investigating the case at a court in Gavia, a town on the outskirts of Barcelona where the footballer lives.

"He has nothing to do (with these issues), he only plays football," Jorge Horacio Messi said.

State prosecutors initially asked that the case against Messi be dropped, arguing the player only followed the instructions of his father who he "trusted fully and blindly".

But the judge in charge of the case in October 2015 rejected the request, arguing in his ruling that "there are rational signs that the criminality was committed by both accused parties".

Questions over the player's finances increased after Messi and his father were among those named in April in reports by international media who received a vast trove of data and documents leaked from a law firm based in Panama.

The Messi family acknowledged the existence of the company but they said it was "totally inactive" and never had any funds.

The scandal appears not to have dented the popularity of the footballer whom Forbes magazine says was the world's fourth highest paid athlete last year with earnings of $74 million.

Both Barcelona and the Argentine Football Association have supported the player, who is loudly cheered whenever he appears on the pitch at the Spanish club's Camp Nou stadium.

Barcelona managers have even insinuated that there is a conspiracy to tar the image of their star player, who has been key to the club's success on the pitch in recent years.