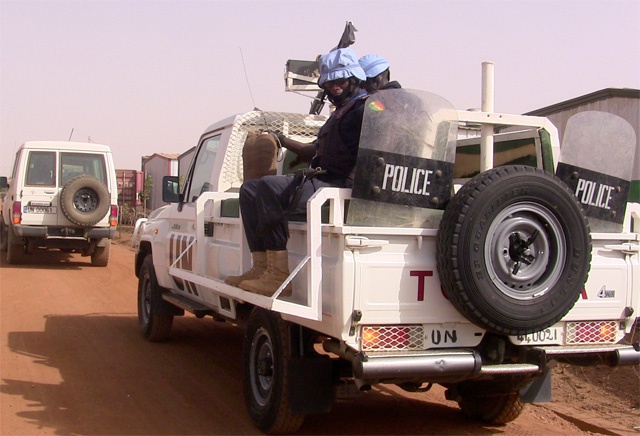 (AFP) - At least five UN peacekeepers were killed in an ambush in central Mali by suspected militants on Sunday, the UN and police sources said.

The attack is the first time the UN peacekeeping mission in Mali, MINUSMA, has recorded fatalities in the centre of a country long beset by violence in its vast and desolate north.

"According to preliminary information, five peacekeepers were killed. Another was seriously hurt and is being evacuated," MINUSMA said in a statement.

The UN did not immediately confirm the nationality of the dead soldiers but a Bamako police source indicated a group of Togolese peacekeepers "came across a mine and a terrorist attack some 50 kilometres out of Mopti."

UN Secretary-General Ban Ki-moon condemned the attack, according to a statement from his spokesman that referenced preliminary reports saying the peacekeepers were from Togo.

"The Secretary-General presents his heartfelt condolences to the families of the five peacekeepers who have died in the cause of peace and to the government and people of Togo," the statement said.

"He calls for swift action to bring the perpetrators of this crime to justice."

First reports had indicated four Togolese peacekeepers were killed in the mid-morning attack on a MINUSMA convoy some 30 kilometres (20 miles) west of the town of Sevare in Mopti region.

"I most strongly condemn this abject crime which adds to other terrorist acts targeting our peacekeepers and which constitute crimes against humanity under international law," said Annadif.

Sunday's attack came just two days after authorities reported five Malian soldiers killed and four wounded Friday when their vehicles hit a mine in the north and then came under sustained fire.

Last week also saw five peacekeepers from Chad killed and three others wounded in an ambush in the northeast by Ansar Dine jihadist fighters.

The Mali mission is the most dangerous active deployment for UN peacekeepers and it has been hit by sharp internal tensions since its launch in July 2013.

With Sunday's attack, at least 64 MINUSMA peacekeepers have been killed while on active service, while another four have died in friendly fire incidents, UN figures show.

The north has seen repeated violence since it fell under the control of Tuareg-led rebels who allied with jihadist groups linked to Al-Qaeda in 2012.

The Islamists were largely ousted by an ongoing French-led military operation launched in January 2013, but they have since carried out sporadic attacks on security forces from desert hideouts.

Rival armed factions and smuggling networks mean the region has struggled for stability since Mali gained independence from former colonial power France in 1960.