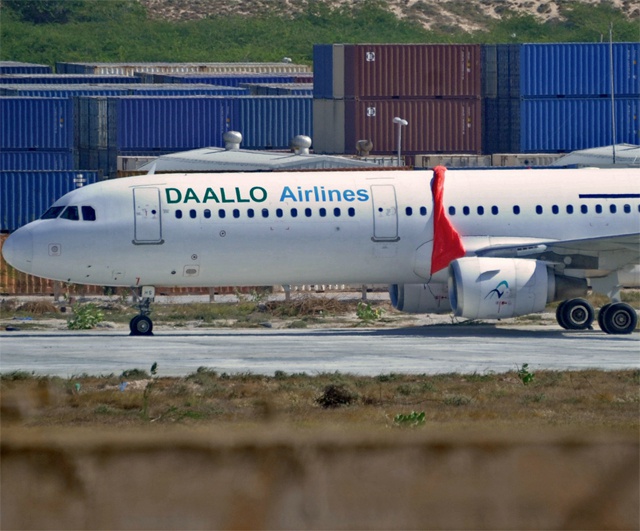 This file photo taken on February 03, 2016 shows a plane operated by Daallo Airlines, after it made an emergency landing on February 2 in Mogadishu following a blast. (MOHAMED ABDIWAHAB / AFP)

(AFP) - A Somali military court on Monday jailed two men for life for their role in a botched laptop bomb attack on an aeroplane claimed by the Al-Qaeda-linked Shebab.

The February 2 blast left a metre-wide (three-foot) hole in the fuselage of the Daallo Airlines plane shortly after it took off from Somalia's main airport in Mogadishu, killing only the suspected bomber and forcing an emergency landing.

Two of the 74 passengers aboard were slightly injured.

"Abdiweli Mohamud together with Areys Hashi Abdi, who is absent, were found guilty as charged. The court sentences them to life imprisonment," Shute said Monday.

Both men were also found guilty of being members of the Shebab. Abdi dodged arrests and is on the run.

Of 10 others also on trial in connection with the attack, five received up to four-year jail terms while the remainder were released after the court found them not guilty.

Somalia's military court has in the past regularly sentenced convicted members of the Islamist Shebab to death by firing squad.

The Shebab, which is fighting to overthrow the internationally-backed government in Mogadishu, claimed the February attack as "retribution for the crimes committed by the coalition of Western crusaders and their intelligence agencies against the Muslims of Somalia".

The bomber had been supposed to board a Turkish Airlines flight but the Turkish plane did not turn up, and Daallo Airlines instead agreed to fly the passengers to Djibouti.

Soon afterwards Somali intelligence officials released surveillance footage appearing to show a passenger being given a laptop in which the bomb was concealed.

The city's airport is heavily fortified and adjoins the capital's main base of the African Union mission to Somalia, the 22,000-strong force backing the government in the battle against Shebab insurgents.