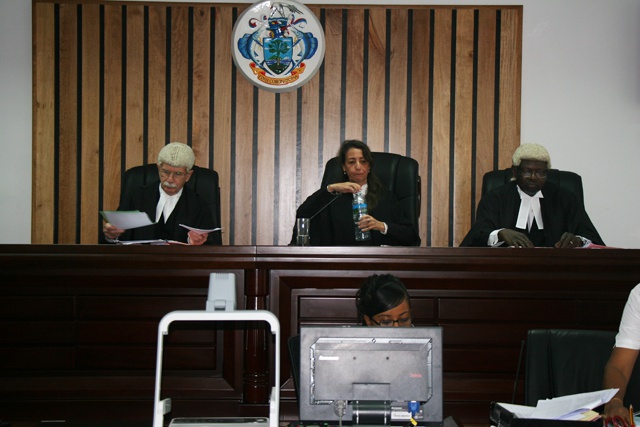 The case against Michel's election win was filed after a historical run-off contested by President Michel, also leader of the ruling Parti Lepep, and the leader of the Seychelles National Party, Wavel Ramkalawan.

Ramkalawan had petitioned the court to rule that none of the two candidates had obtained the absolute majority of the votes cast, and to nullify the results on the basis of irregularities committed and non-compliance to the electoral laws. Both petitions were directed at the Electoral Commission, President James Michel and the Attorney General.

The Constitutional Court ruling comes two months after the parties in the case had made their final statements to the court.

No merit to rule that no candidates won a majority

In dismissing the first petition, Ugandan judge Dan Akiiki-Kiiza, British judge Crawford Mckee and Seychellois Chief Justice Mathilda Twomey said it had ‘no merit,’ and that the Electoral Commission’s decision to declare Michel as the winner was in order.

Twomey wrote that the judges were satisfied that valid votes were cast.

The court noted that guidance was sought from the International Institute for Democracy and Electoral Assistance (IDEA) and that the court had consulted other electoral system of other countries on what constitutes a vote.

The ruling also reiterated a Court of Appeal judgement in favour of the Popular Democratic Movement in 2011 on the issue of votes cast. The opposition party had contested the use of the words votes cast to determine the allocation of proportional seats in the assembly.

Burden of proof not satisfied

With regard to the second petition referring to allegation of illegal practices and non-compliance of Election Laws, the court had heard some 60 witnesses from both the petitioner’s and respondents’ side during the trial.

Testimonies related to allegations of the buying of identity cards, offers of money and gifts, suggestion of temporal loss arising from statements made by alleged agents of the second respondent [President Michel], irregularities in counting of ballots, use of pens or pencil to mark votes instead of markers among many others.

In their ruling the Constitutional Court judges said “the Petitioner has not discharged the burden of proof to the standard required by law in this matter.”

While noting that the court was of the view that ‘some reprehensible acts’ had occurred, it was not persuaded that these could satisfy the “tests of agency to directly or indirectly link them to the second respondent.”

The court also noted that the petitioner could not prove that the illegal acts if perpetrated had affected the result of the elections.

In a statement issued Tuesday afternoon, President Michel said the court’s decision was a “landmark victory for the rule of law and democracy in Seychelles” and a “powerful affirmation of judicial independence and impartiality in the country.”

Michel noted that he never doubted the legitimacy of his election and that of the electoral process.

“I may have been disappointed by the results but I never had any intention of challenging them. I accepted them, in good faith, as the manifestation of the sovereign will and right of the people of Seychelles,” said President Michel.

In his statement the Seychellois Head of State said that he has taken note of  challenges highlighted in the ruling which he says will need to be addressed to further strengthen country’s democratic institutions.

Ramkalawan is disapointed with the court's ruling

Speaking at a meeting organised for opposition supporters Tuesday afternoon, Ramkalawan said he was disappointed.

“The opposition has worked hard and brought all evidences before the court but that while the court has accepted that there were illegal practices the one word that kept coming up was however … so if I were to name the ruling I would call it the ‘however judgment,'” he said.

Reactions of the different parties

Ramkalawan’s lawyer, Bernard Georges, said that while the court did not rule in his client’s favour it did recognize that there was a lot of irregularities and non-compliance to the election laws during the December vote.

“We lost the case but the allegations of illegal practices have been proven," said Georges.

Commenting on the next course of action, Georges said: “My client will decide, I will have to talk to him and read the rulings to see where the court has made mistakes and decide if the mistake should be challenged or not. It’s not my decision but rather that of my client, Mr. Ramkalawan.”

Ramkalawan may decide to appeal the Constitutional Court ruling before the highest court in the land – the Court of Appeal.

The lawyer representing President James Michel, Basil Hoareau, said Tuesday’s decisions represents a ‘victory for democracy’ as an aggrieved party not satisfied with the outcome of an election has sought recourse before the court of justice.

“The petitioner might appeal and if so we will definitely contest the appeal. However I am convinced that at the end of the day even the Court of Appeal will uphold the Constitutional Court’s decision,” said Hoareau.

The Attorney General Ronny Govinden spoke about the court’s comments that while the petitioner had not proven the illegal practices claimed before the courts neither that these practices have affected the election results, there were lessons to be learnt.

“I believe all authorities and individuals concerned should consider the court’s recommendations for the next time we engage in an election process so we can learn from the mistakes committed to ensure a better and more effective process,” said Govinden.

Recommendation from the court

When making note of illegal practices, the Constitutional Court said that it will be preparing a report, adding that concerned individuals named during the hearing process will be given the opportunity to be heard in defence of these practices.

Six individuals named have been asked to report to the court on June 28 to answer to alleged illegal practices attributed to them during the proceedings.

The Court has also outlined some deficiencies of the Electoral Commission in discharging its responsibilities, including that the Director of Elections was “far too lax in the execution of his duties and seemed to have not grasped the importance of his role both for the satisfactory conduct of elections and for the advancement of democracy and the nation as a whole.”

The lawyer representing the Electoral Commission described both judgements as ‘fair’ adding that the outcome will mean that all parties will take future elections more seriously.

“The Electoral Commission will have to meet and go through the ruling to see the shortcomings mentioned and propositions made by the court,” said Samentha Aglae.

She added that measures will have to be taken rather rapidly considering the country will be organising another election – legislatives polls -- soon.

The Constitutional Court also noted that it will be forwarding an illegal practice to the Electoral Commissioner in regards to the petitioner Wavel Ramkalawan.

This relates to the a letter which President Michel’s lawyer Basil Hoareau presented in court, which he said the petitioner had published in the Tamil Language to voters from the Tamil Community in Seychelles promising them senior posts in his government so as induce them to vote for him or to refrain from voting for his opponent.

“We are obliged to make a report on this matter to the Electoral Commission in terms of striking his name off the register of voters,” states the judges’ ruling.

Commenting on the matter Ramkalawan’s lawyer said: “We need to see what was the intention of the court, so I will not comment on the matter. I find it strange that the court has found a lot of irregularities on one side but punishes the person who has brought the matter before the court.”

Tuesday’s verdict was by far one of the longest delivered in a Seychelles court -- over four hours in a packed courtroom -- and was broadcast live on national television and radio.

Although the two petitions were combined as one case as it involved the same parties, the rulings were delivered separately – the first decision consisting of a 30-page document and the second a 130-page document.