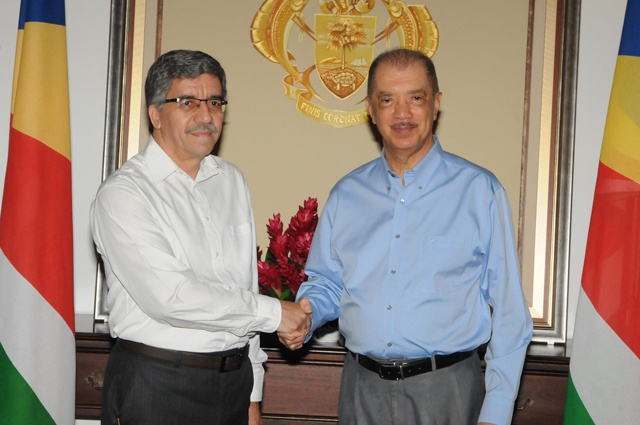 (Seychelles News Agency) - Seychelles and Algeria will continue to collaborate in the areas of environment and sports, the new ambassador says.

“We have already established good relations with the Seychelles Football Federation, and we are happy to help and assist sports in general in the Seychelles,” Mokaddem Bafdal said after presenting his credentials to President James Michel on Tuesday.

This year Seychelles, an archipelago of 115 islands in the western Indian Ocean, marks 40 years of bilateral relations with Algeria.

Bafdal and Michel also discussed other areas of interest such as the blue economy, training opportunities and the environment.

“We have spoken about how to engage in sports,” Bafdal said just before Seychelles hosts Algeria in the Africa Cup of Nations football qualifying match at Stad Linite. The new ambassador says he is looking forward to the match.

The two teams face off in a group J match on Thursday June 2,with the North African team having the advantage of not having lost any matches so far. Algeria leads the group with 10 points and will qualify for the finals if they avoid defeat against Seychelles, currently third with 4 points. The last time the two met in June 2015 Algeria won by 4-0.

Bafdal is based in Madagascar another Indian Ocean Island State and is also ambassador to Mauritius and the Comoros.