'At least 10' dead in jihadist attack on Mogadishu hotel 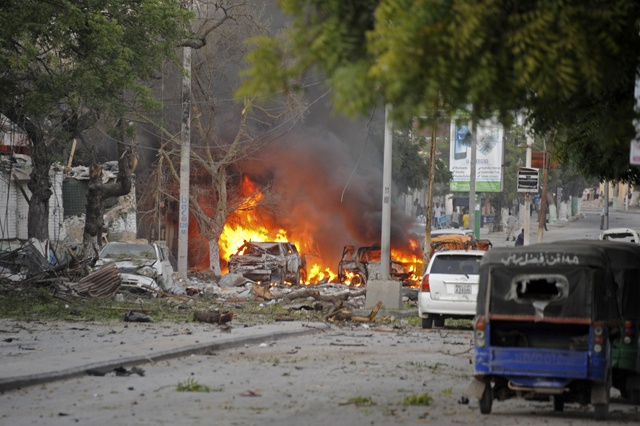 This picture taken on June 1, 2016, shows a car bruning after a terror attack at the Ambassador Hotel, after Somalia's Al-Qaeda-linked Shabaab, launched a deadly attack on a top Mogadishu hotel popular with MPs, setting off a car bomb and fighting security forces inside the complex. (MOHAMED ABDIWAHAB / AFP)

(AFP) - At least 10 people, including two lawmakers, were killed in a car bomb and gun attack Wednesday on a top hotel in Somalia's capital Mogadishu claimed by the Al-Qaeda-linked Shabaab group, medical and security sources said.

Around 40 others were injured in the assault on the central Ambassador Hotel, where Somali security forces continued to battle Shabaab fighters into the evening, around five hours after the attack began.

"The attack was started with a heavy explosion and members from the Mujahedeen fighters stormed the building," the Shabaab said in a statement.

A security source told AFP that "a VBIED (vehicle-borne improvised explosive device) exploded" after which a firefight erupted inside the hotel complex.

"I saw the dead bodies of seven people, most of them burned," he added.

"The security forces are now inside and the whole area is cordoned off."

Shabaab fighters were chased out of Mogadishu in 2011 but the group remains a major threat in both Somalia and neighbouring Kenya, where it carries out frequent attacks.

They jihadists are fighting to overthrow Somalia's internationally-backed government.

On Wednesday, an official said the Shabaab commander who led a attack on Kenya's Garissa University in 2015 that left 148 people dead had been killed in a special forces raid in the south of the country.

Also on Wednesday, Pentagon spokesman Peter Cook said another senior Shabaab military commander was "presumed killed" following a US air strike on May 27.