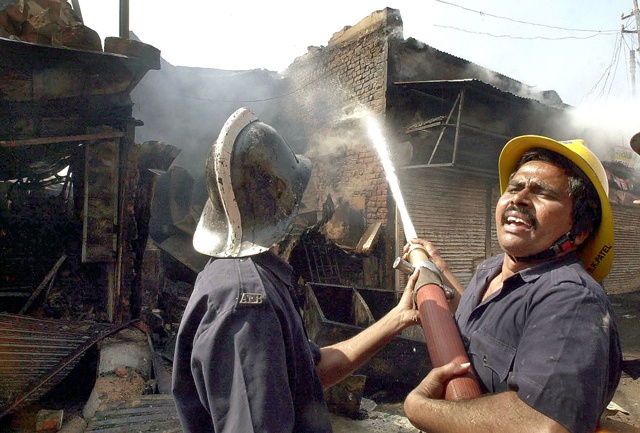 This file photograph taken on March 2, 2002, shows an Indian fireman as he shouts instructions while attempting to extinguish a fire in Ahmedabad during rioting in the western Indian city. (SEBASTIAN D'SOUZA / AFP)

(AFP) - An Indian court convicted two dozen people on Thursday over a massacre during religious riots 14 years ago when Prime Minister Narendra Modi was chief minister of Gujarat state.

Judge PB Desai found them guilty of hacking to death and burning 69 Muslims sheltering in a residential complex in the city of Ahmedabad, in one of the single worst massacres of the week-long violence.

The riots that left more than 1,000 people dead in total have long dogged Modi who was accused by human rights groups of turning a blind eye to the violence as head of Gujarat.

But the latest verdicts are unlikely to have an impact on the Hindu nationalist premier who was cleared in 2012 by a Supreme Court-ordered investigation of any wrongdoing.

Celebrations erupted in the courtroom in Ahmedabad amid tight security after the verdicts were read out, with victims and their families clapping and thanking the judge.

But Desai also acquitted another 36 people for lack of evidence and stated the massacre was a spontaneous attack, not a criminal conspiracy as many victims have alleged.

"I am happy 24 accused were convicted but sad that 36 others have been acquitted. This is incomplete justice and I will fight till the end," Zakia Jafri, whose husband was killed in the massacre, told reporters.

More than 300 witnesses gave evidence during the years-long trial that began in 2009 but was delayed by legal challenges and several of the original accused died.

The 24 convicted are expected to be sentenced next week.

Prosecutors had been seeking life in prison for all of the accused for storming the Gulbarg Society complex and killing the Muslims who were hiding there.

Among those killed at the complex was former opposition Congress lawmaker Ehsan Jafri whose wife, Zakia, claims that he repeatedly called police for help but none came.

The violence was triggered by the death of 59 Hindu pilgrims in a train fire on February 27, 2002 that was initially blamed on Muslims.

Hindus bent on revenge rampaged through Muslim neighbourhoods in some of India's worst religious riots since independence from Britain and partition in 1947.

More than 100 people have already been convicted over the riots, including one of Modi's former state ministers who was jailed for instigating some of the killings.

Rupa Mody, whose teenage son went missing during the massacre and whose body was never found, said she has long prayed for justice.

"I don't want any other mother to suffer the way I have as a mother who yearns for her son," she told the NDTV network.

"It hurts so much when your family is tormented and your house is destroyed."

The trial into the massacre only began after the Supreme Court ordered in 2009 a reinvestigation into some of the worst incidents of the riots.

But one year later the same court issued a stay on any final verdict from the trial after a petition was filed seeking a probe into whether Modi and others played a role in the violence.

The court only lifted its order last year when a lower court upheld a rejection of the petition.