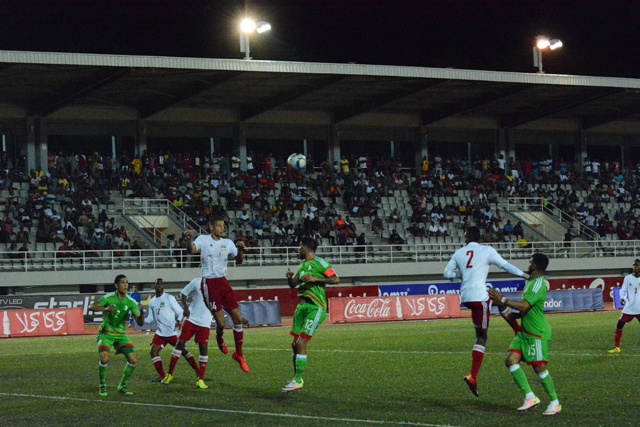 (Seychelles News Agency) - Seychelles' national football team lost 2-0 to Algeria, the No. 1 team in Africa, in a qualifying match for the Africa Cup of Nations (AFCON) 2017 on Thursday.

In front of a big Seychellois crowd, the local side resisted the Algerian pressure up to the last five minutes in the first half.

Algerian Yassine Benzia, the striker from the French club in Lille, capitalised on a defensive error to break the deadlock and put the visitors ahead 1-0.

Algeria’s interim head coach Nabil Neghiz said, “We were a bit uncomfortable at first with the artificial turf, but the moment we scored, the players gained their confidence and used their experiences.”

The team from Seychelles, an archipelago in the western Indian Ocean, could not stop Hillel Soudani of Croatian club Dinamo Zagreb, as Algeria netted another goal and sealed its 2-0 win.

Seychelles' coach Ralph Jean-Louis was satisfied with his team’s performance.

“It was a good match even though we lost. We would have liked a positive result, but we have to realise that we were playing against the team that is No. 1 in Africa. So we accept the results and see it as an experience,” said Jean-Louis.

Algeria is the highest-ranked African country on the FIFA ranking, in 32nd place, and the victory over Seychelles ensure their qualification spot in the African Cup of Nations in Gabon next year. The North African team is leading group J with now 13 points while Seychelles remain third with five points.

Facing such a strong team did not prove to be overly intimidating for the Seychelles team.

“Certainly Algeria technically are faster than us, but we were able to hold on in the first half and in the second one, as tiredness crept in, Algeria scored another one. We were nevertheless able to stay organised for most of the match,” said Jean-Louis.

Neghiz says qualifying for the final stage in Gabon was his team’s the priority.

“We wanted to qualify, and we did. We will now focus on the World Cup qualification which is now our main objective,” he said.

The Algerian interim coach was impressed with the local side with many young players.

“The Seychelles team which is very young is a very good team, and if they work together, they can do very well. I have seen some very good individual talent in the players and collectively they can go far.”

For Seychelles, the focus is now on the COSAFA Cup next week in Namibia.

“We now have a few days to work on the weaknesses, and I hope in our first match against Madagascar we perform a lot better,” said Jean-Louis.