The jellyfish tree: A rare species from Seychelles could soon display in Scotland 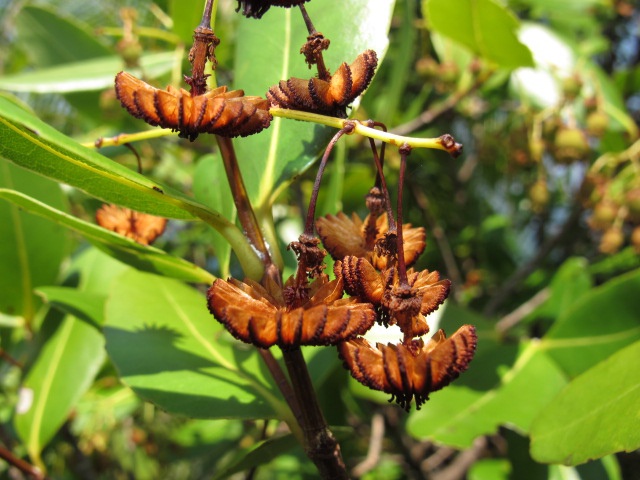 The jellyfish tree - named because of the distinctive jellyfish-like shape of its fruits. (Christopher Kaiser-Bunbury)

(Seychelles News Agency) - One of Seychelles' rare endemic plants, the jellyfish tree, could soon be on display in Scotland, says a representative of the Royal Botanic Garden of Edinburgh.

A garden official, Fiona Inches, said that four seeds of the jellyfish tree (Medusagyne oppositifolia) have been growing in the botanical garden in Scotland since 2003 and could soon be viewed by visitors.

For decades it was believed the species was instinct. No specimen was seen in Seychelles between 1903 and 1970, when it was rediscovered in the Seychelles islands. The species remains on the critically endangered list of the International Union for the Conservation of Nature.

Named because of the distinctive jellyfish-like shape of its fruits, the jellyfish tree -- called ‘Bwa Mediz’ in Creole -- are found at four locations on Mahé, Seychelles’ main island: Bernica, Mont Sebert, Mont Copolia and Mont Jasmin. The highest population is found at Bernica mountain in the west of the island.

Today it is estimated that there are less than 100 mature jellyfish tree.

Wanting to find out why this plant was not propagating fast enough to be removed as ‘critically endangered’ list, a Ph.D. student, Aline Finger, spent two years working on her project in the Seychelles.

Finger investigated genetic variation across the populations of the jellyfish tree, their reproductive biology and best propagation methods.

“Each population has unique genetic information that it doesn’t share with any other populations,” said Finger, highlighting the need for protection of even small populations, consisting of a few trees.

With the low number of trees, Finger also looked at how pollination occurs, as well as seed dispersal which is vital for the survival of jellyfish tree, especially as all four populations are located very far from each other.

“Hand pollination experiments between two sites resulted in higher amounts of viable seeds per fruits and seedling survival, compared to pollen transfer in one site only,” she said.

Experiments on growing the seeds in other parts of the world have not been successful in the past, and conservationists in Seychelles are still looking for ways to save the jellyfish tree.

Local conservationist Denis Matatiken did research on the species in 2009 and said that reproduction among close relatives or inbreeding can reduce long-term survival.

“Small population are sensitive to local extinction because of various factors such as habitat loss, over-exploitation, invasive species,” said Matatiken.