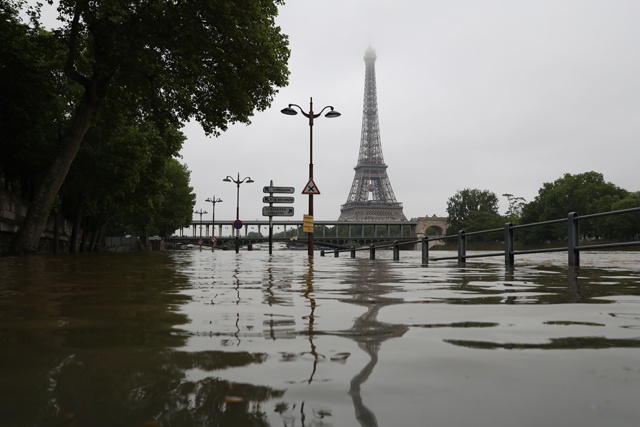 A picture taken on June 2, 2016 shows the river Seine bursting its banks next to the Eiffel Tower in Paris. (AFP PHOTO / KENZO TRIBOUILLARD)

(AFP) - The rain-swollen River Seine in Paris reached its highest level in three decades Friday, spilling its banks and prompting the Louvre museum to shut its doors and evacuate artworks in its basement.

Parisians were urged to avoid the banks of the river which was expected to reach a peak of six metres (19 feet) Friday, while deadly floods continued to wreak havoc elsewhere in France and Germany.

In France a man on horseback died after he was swept away in a swollen river in Evry-Gregy-sur-Yerre, southeast of Paris, local authorities said on Thursday.

And in Germany, a 65-year-old man was found dead in the flood-hit town of Simbach am Inn, bringing the total death toll in the country this week to ten.

Days of torrential rain have only added to the gloomy atmosphere in France, also facing a third full day of train strikes after months of protests and political turmoil.

Mohamed Amine, a tourist from Venice, watched the rising waters from a Paris bridge with amusement.

"I am used to having water up to my knees during the Aqua Alta," when the Italian city floods in winter, he told AFP.

"But people in Paris are not used to it."

Some towns in central France have been hit by their worst floods in over a century, with more than 5,000 people evacuated since the weekend and around 19,000 homes without power.

In Paris, officials were erecting emergency flood barriers along the Seine and a suburban train line running alongside the river was closed.

The riverbanks are home to both the Louvre -- the world's most visited museum -- and the Musee d'Orsay, which was also preparing for the worst.

The Musee d'Orsay, a converted railway station which hosts the world's greatest Impressionist collection, closed early Thursday and was to move its most vulnerable works to upper floors.

While the river's swelling has so far caused little damage in Paris and is unlikely to submerge the city centre, public information boards urged those living near the Seine to clear out their basements.

Rescuers in the Parisian suburb of Longjumeau were paddling up streets in lifeboats, while in the town of Montargis, only the tops of cars could be seen peeking above the surface.

Forecasters in both France and Germany have warned of more downpours over the next 24 hours.

French President Francois Hollande said a state of "natural catastrophe" would be declared when the cabinet meets next Wednesday, a necessary step to trigger compensation payments.

Several towns in southern Germany have been devastated by flooding.

In Simbach am Inn, the force of the water swept away the entire stock of a sawmill, leaving huge stacks of splintered wood blocking roads.

On one street, a car could be seen parked vertically against the wall of a house, pushed there by the floodwaters. Many other vehicles lay flipped over on roads blanketed by mud.

Six people have been killed in the Simbach area, including three women from the same family -- a mother, grandmother and daughter -- who had been trapped in their house.

Two other elderly people were also found dead in their homes.

"The (rise in) water was so quick that practically no residents had the time to run away," police spokesman Armin Angloher said.

The deaths bring the toll from the floods in Germany to 10, including four killed earlier this week in the southern region of Baden-Wuerttemberg.

Three others are missing, a police spokesman in Bavaria state said.

German Chancellor Angela Merkel said her thoughts were with the families "who have been plunged into this devastation".