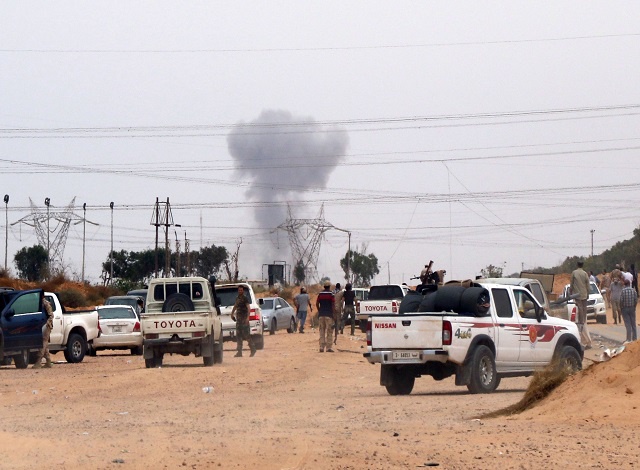 Forces loyal to Libya's UN-backed unity government are seen during clashes with jihadists of the Islamic State (IS) group around 23 kilometres (14 miles) west of Sirte on June 2, 2016. According to Libyan officials fighting resumed on June 1 on the outskirts of Sirte between our forces and jihadist during which three pro-government troops had been killed and 10 more wounded. Sirte was the hometown of slain dictator Moamer Kadhafi and, since seizing it in June last year, IS has turned it into a recruitment and training camp. (MAHMUD TURKIA / AFP)

(AFP) - The prime minister of Libya's UN-backed unity government has ruled out an international military intervention to fight the Islamic State group, which has had a growing presence in the country since 2014.

Some 25 nations including the United States and Russia agreed last month to help Libya arm itself against the jihadists, but Prime Minister Fayez al-Sarraj told French newspaper Journal du Dimanche he would not allow foreign troops on the ground.

"It's true that we need help from the international community in our fight against terrorism and it's true that this is something we have already received," he said in the interview, published Sunday.

"But we are not talking about international intervention," Sarraj said, adding that the presence of foreign ground troops would be "contrary to our principles".

"Rather we need satellite images, intelligence, technical help... not bombardments," he said.

The Government of National Accord (GNA), established in Tripoli more than two months ago, has been trying to unify violence-ridden Libya and exert its control over the entire North African country.

However, it faces opposition from a competing authority based in the east which has its own armed forces -- militias and some units of the national army -- commanded by controversial General Khalifa Haftar.

Both bodies are currently engaged in a race to be the first to drive the Islamic State group out of the coastal city of Sirte, a bastion for jihadists in the country.

On Saturday, forces loyal to the GNA said they had retaken a jihadist air base near the city.

Sarraj told Journal du Dimanche that "total victory over IS in Sirte is close".

"(We hope) that this war against terrorism will be able to unite Libya. But it will be long. And the international community knows that," he said.

General » Be a reporter: Write and send your article » Subscribe for news alert
Tags: Libya, politics, conflict, IS