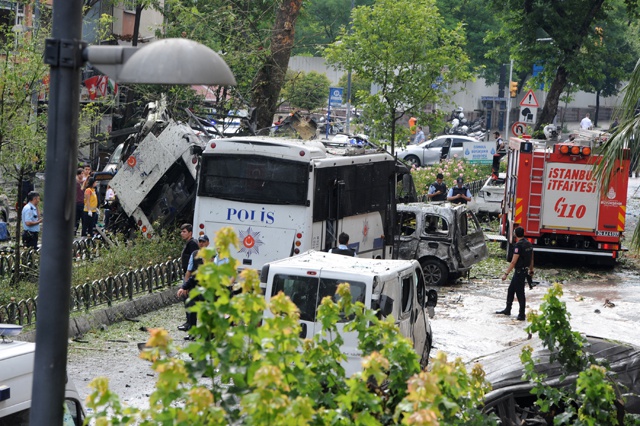 Police officers and rescuers inspect the site of a bomb attack that targeted a police bus in the Vezneciler district of Istanbul on June 7, 2016. (STRINGER / DOGAN NEWS AGENCY / AFP)

(AFP) - A bomb ripped through a Turkish police bus near Istanbul's historic centre Tuesday, killing seven officers and four civilians in the latest of a string of attacks in Turkey's biggest city.

The car bomb targeted a bus carrying anti-riot police as it was passing through the central Beyazit district close to many of the city's top tourist sites, Istanbul governor Vasip Sahin said in a statement on Turkish television.

Thirty six people were wounded, three of them seriously, he added.

The attack had the hallmark of Kurdish militants who have repeatedly targeted the security forces but Islamic State jihadists have also staged several attacks in Turkish cities in the past year.

Reports said the explosion took place close to the Vezneciler metro station, which is within walking distance of some of the city's main tourist sites including the famed Suleymaniye Mosque.

The metro station was closed as a security precaution.

The bomb reduced the police vehicle to mangled wreckage and the windows of nearby shops were blown out by the force of the blast.

Cars parked in the vicinity were also damaged.

Scheduled examinations at Istanbul University -- which lies close to the scene of the blast -- have been cancelled.

Reports said that shots were heard.

The loudspeakers on mosques were used to warn people to vacate the area, after which a controlled explosion was carried out on a suspicious vehicle.

Prime Minister Binali Yildirim was briefed by Istanbul governor as well as Interior Minister Efkan Ala on "the atrocious terror attack", his office said in a statement.

Foreign Minister Mevlut Cavusoglu, in an interview with state-run TRT television, condemned the attack, saying that Turkey was fighting on all fronts against "any form of terrorism."

There was no immediate indication of who had carried out the attack.

But since the start of the year, Turkey has been hit by a sequence of attacks that have rattled citizens and also caused tourism to plummet.

Last month, at least eight people including soldiers were wounded by a remotely detonated car bomb targeting a military vehicle in Istanbul that was claimed by the PKK.

Turkey has stepped up its military campaign against PKK militants in the southeast of the country and in neighbouring Iraq.

On January 12, a dozen German tourists were killed in a bombing in the heart of Istanbul's tourist district blamed on Islamic State.

Two months later, three Israelis and an Iranian were killed in a bombing on Istanbul's main Istiklal shopping street which was also blamed on IS.

Turkey, a member of NATO and the US-led anti-jihadist coalition, has responded defiantly to the attacks, vowing to overcome both the PKK and Islamic State.

The Kurdish militants have in turn threatened more attacks.

The violence has had a devastating effect on the tourism industry, with the latest attack coming at the worst possible time, at the outset of the key summer season.

Some 1.75 million foreigners came to Turkey in April, down more than 28 percent on April 2015, the tourism ministry said in its latest release.

The fall was the steepest monthly decrease for 17 years and raised fresh concerns about the health of the industry.

The US embassy in Turkey in April warned of "credible threats" to tourist areas in Istanbul and the resort city of Antalya, in particular to public squares and docks.